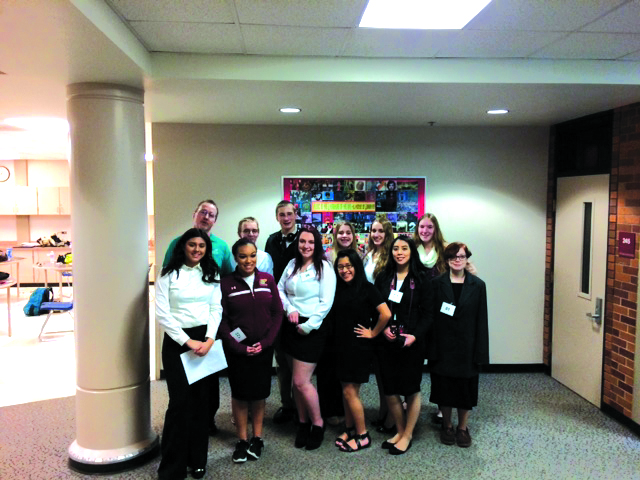 Members of the Winlock Chapter of SkillsUSA

The Winlock Chapter of SkillsUSA competed at an annual conference last Saturday at Fort Vancouver. From the variety of events on offer the students chose four competitions to compete in: Job Interview, Prepared Speech, Extemporaneous Speaking, and Quiz Bowl.

Most of the members competed in Job Interview where the students complete a mock interview for the job of their choice. Two students made it to call backs, the second and final rounds. These were Secret Ettner and Emma Sanchez.

Five students also competed in speech events. Emma Sanchez, Giselle Molina, and Secret Ettner competed in Prepared Speech. The members had to write out a speech on a given topic to last five to seven minutes. Maggie Howsden and Sable Pirtle participated in Extemporaneous Speaking, an event where the participants must compose a speech in five minutes that runs from three to five minutes in length.

Quiz Bowl was the fourth and final event. The rules of Quiz Bowl are very similar to Knowledge Bowl in which a team of four or five competes against other teams to answer questions. Unlike Knowledge Bowl, however, all wrong answers are subtracted from the team's score. All of the students participated in this event, and the Winlock Chapter's Team J advanced on to the final round. Team J took second place overall. Its members were Sarah Maestas, Jenna Jones, Leanna Wolf, and Sable Pirtle.

It has yet not been announced who will continue on to State. The region usually sends on the top six in each competition, sometimes more for Job Interview. The State Conference will be held in Tacoma and usually spans three days. Congratulations SkillsUSA members and good luck at state!