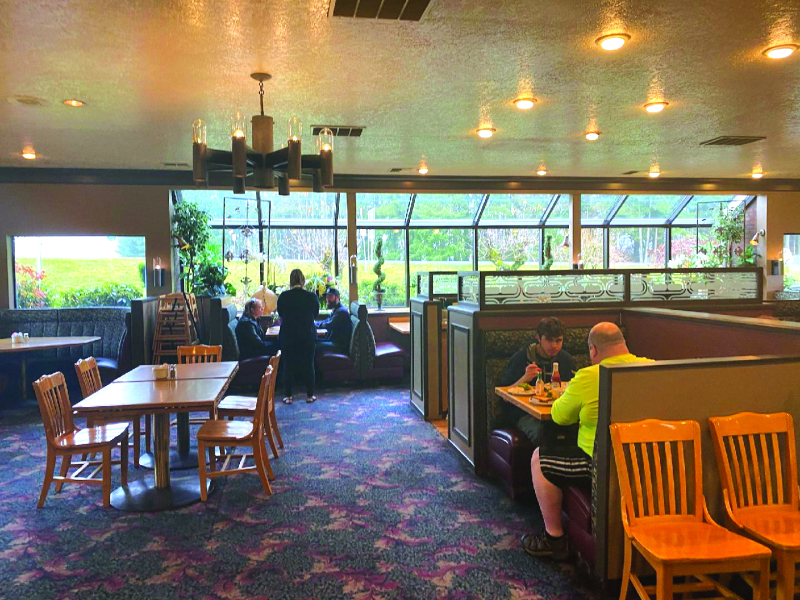 Inside seating at Spiffy's restaurant

As of January of this year, Spiffy's restaurant has been under the ownership of Rod and Dianna Samuelson for 50 years. They have seen it change from a single-wide walk-up trailer to the full-service restaurant it is today. But, in the midst of the anniversary, Spiffy's has been closed due to an ongoing battle with Governor Jay Inslee to reopen.

Spiffy's was a small walk-up hamburger stand when the Samuelson's bought it, just a single-wide trailer. The restaurant was expanded to include a few dozen tables, but still small. Spiffy's employed many young adults as waitresses, cooks, and chief bottle washers. Employees learned to do it all. Spiffy's gave its employees all a start, how to deal with customers, how to make a perfect egg, and more importantly how to work together as a team. Working collectively is more important than working as an individual, today that is still the attitude at Spiffy's.

Recently, Spiffy's has been in the news due to defying Governor Inslee's orders of no indoor dining. On November 30, 2020, owner Rod Samuelson made the decision to reopen his restaurant. The reason, "Employee's could not get unemployment. There are two ways, either on the phone but the phones were maxed out or the internet. Leaving a message did not work as employees would not get a callback," stated Samuelson.

He continued, "Our employees had mortgages, rent, food, and basic living expenses. They couldn't find a job, we had no choice, we had to help our employees. We had to find a way to put food on their tables, so we opened up."

The business had been down prior to opening, at least 50%, but December was the best month since opening the restaurant 50 years ago. People were ready to eat out and they did. But, they had to make a choice, fines were mounting, do we stay open or do we close? They made the decision to close. "If we continue to stay closed, the fines will be forgiven. No one has had their fines collected, they have only assessed fines. This is all just smoke," stated Samuelson.

Samuelson expressed his sincere appreciation to those who stood by him during his re-opening, he stated, "I am so thankful for the patronage, for all of the open up rallies, for all those who came out, we had great support from everywhere."

Now, Spiffy's will go through the new Payroll Protection Plan the government just passed. That means he can pay his employees, "The PPP goes through the middle of May, we will revisit at the end of May what we will do if we are not open."

Spiffy's started something after they opened, another restaurant opened, and another. During their opening, Spiffy's kept the previous plan of fewer tables, social distancing, and sanitation. The employees had masks, they were open and as safe as they could be.

Spiffy's has employees who have worked there for decades, many locals have worked there throughout the years. They chose to go back to work to feed their families, they had to do something. Now, Spiffy's will continue to pay their employees through the PPP program, they are able to help them like they wanted to. But, it's a wait-and-see game as to when the Governor will allow restaurants to open for indoor dining.

One of the things that Samuelson would say to Governor Inslee if he had the chance is "Why are we not open like so many other states, some are fully open and some are partially?"