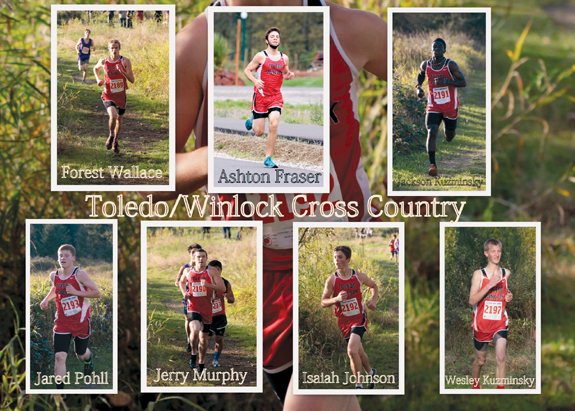 After being flooded out of a meet in Chehalis a couple of weeks ago, the Toledo/Winlock Cross Country team found themselves in a race with two of the toughest 2B harrier teams in a meet at Onalaska on Oct. 15.

Toledo bested Mossyrock 36 to 38 while Onalaska was 3rd in the standings with 51 points followed by North Beach in a distant fourth.

The team score was a bit of a surprise to T/W Coach Brian Layton who was sure the Vikings had topped his group of runners.

"Their fifth runner (Brandon Butler in 13th place) was ahead of our fifth guy (Jerry Murphy in 15th) so I thought they had us," said Layton.

The two-three finish of Jackson Kuzminsky and Forest Wallace combined with the nine-ten finish of Isaiah Johnson and Jared Pohll netted T/W a lower place/point total.

For Toledo/Winlock, there were several topics of conversation as they prep for league and district championships. First and foremost was the performance of this week's number one T/W runner Kuzminsky, who is a freshman. He passed teammate Wallace in the last 200 meters but still was 60 meters behind Onalaska's Riley Girt who placed first out of 55 runners.

Kuzminsky showed signs of greatness early in the season, but has spent the season learning how to run a 5k race. Early in the season he was running 4th and 5th on the team then spent a couple of weeks in the 6th and 7th spot. Over the last two weeks he has been particularly impressive.

A cross country team has seven runners. The sum of the first five runner's places in a given race gives the team total.

Wallace has been the consistent number one runner, but Ashton Fraser took that spot in the last race. Ironically, Fraser was nowhere near Onalaska to race on Tuesday and still Toledo/Winlock was able to pull out the team title with their #1 guy on the absent list.

Another improvement in the depth of the team has been the progress of Isaiah Johnson, who claimed the #3 spot after spending much of the season outside of the scoring roster (#6 or 7).

Jerry Murphy, the lone senior on the team, has been inconsistent after returning from military training during the summer. He was just rounding into shape but went out too fast in the early part in this week's race and struggled to 15th place and 5th among his own teammates.

As the Trico League Championships loom, La Center, (the only team to beat T/W this year and currently ranked third in the state) White Salmon and Seton Catholic provide good competition. Add those three teams with Rochester and Elma and the road to state gets pretty crowded at the District IV Championships on November 2nd at the Lewis River Golf Course in Woodland.