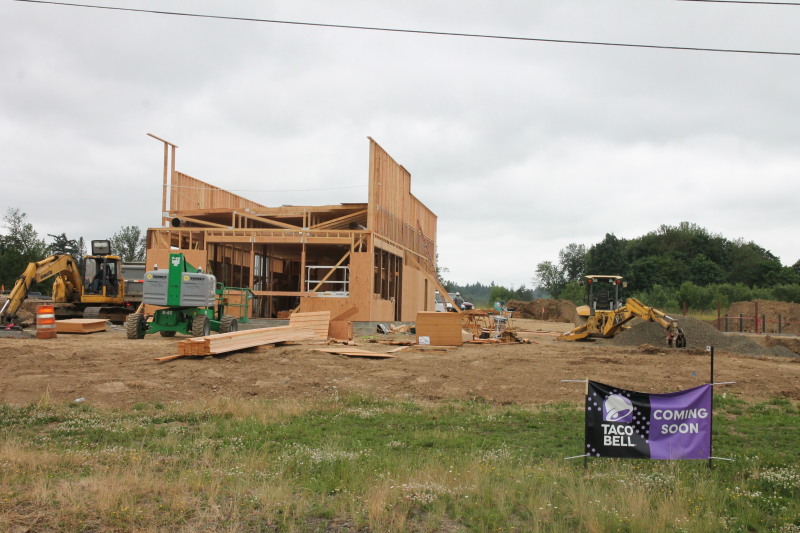 Napavine is getting a new fast food restaurant at Exit 72. Taco Bell is slated to open at either the end of August or the first part of September. Workers have already broken ground and walls are going up, but negotiations with the City of Napavine have yet to be completed.

It's taken Taco Bell two years from the date it purchased the property to negotiate the construction project with the city's Community Development Department, and it wasn't until a recent changeover in the department's directorship that the project has been able to proceed. Problems still exist, however, not just for Taco Bell but for any other company that wants to develop at Exit 72.

Currently the City of Napavine is requiring sidewalks and a turn lane. Taco Bell would like an extension on accomplishing this work until more development takes place. If the work is done now, it is highly likely it will have to be redone at some point in the future once more development comes about.

Jerry Graham, property manager for Hamilton's Walnut Shade LLC, which still owns over 40 acres in the development area, explained, "We are in talks with the Washington State Department of Transportation to put in a roundabout. It would not be feasible for Taco Bell to complete the sidewalks because they would likely be removed. We would like to see the extension approved so we can be consistent with future developments."

Graham went on to state that his company has had disagreements with personnel within Napavine's Community Development Department and that the company is concerned that present and future developments could be hindered by a less than amicable relationship.

"If Taco Bell does not get any concessions, future developments may be stalled," Graham continued. "We want to work with the City of Napavine for the development of Exit 72, but don't feel we have been treated fairly by the Community Development Department."

The Napavine Planning Commission was the first step in the process for the granting of concessions, but members received an information packet only minutes before their meeting and did not grant Taco Bell the requested concessions. Napavine City Council Member Mike Wood stated that the matter needs to come before the city council but hasn't as of yet.

Graham indicated he would like to see the matter on the agenda for the next city council meeting and hopes that Taco Bell will not be stuck paying for work that will soon be obsolete.