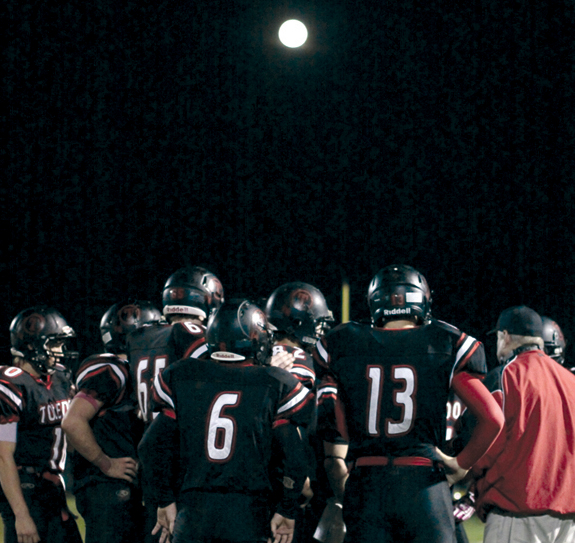 Toledo coaches and players meet during a time out under a beautiful Harvest Moon on Friday night.

The Indians kept it close in the first half, but a series of disastrous events doomed Toledo in a big Trico League loss on Friday night.

Down 13-0, Connor Vermilyea threw double-reverse pass to Konner Crawford for a 46-yard touchdown late in the 2nd quarter. This play was executed perfectly. Toledo's second half was one of disasters.

Take for example a pass over the right side to the aforementioned Vermilyea who's big wide receiver form began rumbling down field fighting for yards with three Kalama defenders until one of them ripped the ball out of his hands. Toledo was driving and feeling good about their chances.

The Chinooks immediately took the momentum and drove the ball for a score.

Disaster struck in the 4th when Toledo fumbled inside the 12-yard line and the Chinooks picked up the ball and trotted into the end zone.

Taylor Hicks was impressive by running the ball 15 times for 80 yards of rushing for the Indians.

Toledo is now 3-3 in the Trico League and 3-4 on the season. They will host La Center for Senior night on Friday.

The Rockets young defense had a difficult time stopping White Salmon on Friday night. Nate Williamson caught a six-yard pass from Mason Klingberg for the only CR score on the evening.

Williamson rushed for 77 yards for the Rockets.

Castle Rock is now 2-5 on the season and 2-4 in the Trico League and will host Ilwaco this week for Homecoming.

The Cardinals gained 189 yards of total offense, but couldn't get the ball into the end zone against the Trojans on Friday night.

Winlock is 0-7 on the season and will host Onalaska on Friday.

The Toledo Volleyball team earned their third victory with another non-league 25-20, 25-12, 25-18 win over Winlock on Saturday afternoon.

Beth Demery had 8 kills while Jessica Kelly added 6. Karlee Coverdell contributed two successful blocks and 17 points with nine of them aces from the serve line. Sarah Subjeck added 15 service points in the victory.

Toledo is now 3-10 on the season and will visit Castle Rock on Tuesday while Winlock falls to 0-10 on the year.