Toledo residents can expect to see a number of upgrades at the boat launch as City Hall begins making use of a $67,000 grant from Tacoma Power awarded last year.

Designated for projects that would enhance public facilities along the Upper Cowlitz River, Mayor Jerry Pratt said he has identified specific upgrades eligible for the grant that would make the boat launch a safer, more enjoyable stop for area recreationalists.

On the list of projects he presented to the City Council during their June 3 meeting were exterior security cameras provided by Toledo Tel at a cost of $3,167.16 for four units.

“That gives us the protection we need down there to keep an eye on things,” said Pratt, stating Toledo Tel had been able to underbid all other companies he had contacted.

The cameras are expected to be accessible remotely at City Hall and by members of the Toledo Police Department and will store their footage remotely, so those who damage or steal the cameras will not damage the video.

“Hopefully, it’ll discourage them,” said Pratt of thieves, vandals and loiterers who misuse the facilities.

Also to help secure the boat launch will be a set of four automatic locking bolts for the bathroom doors, which the city plans to purchase from Ohio-based Go Keyless for $2,608.31.

Pratt said, while the estimate from Go Keyless may not have been the cheapest in regard to per unit costs, they were the only units he found that did not require the city to dismantle the bathroom doors and frames in order to install them.

Once in place, the city will be able to program the bolts to lock and unlock at certain times of day, eliminating the need for a city employee to be on hand every morning and evening to tend to the doors. Pratt said this should help stem the potential for the theft of bathroom supplies, which he said has been a challenge as of late.

Lastly, and with the most anticipation, was a proposal for an 18’ x 18’ gazebo at the boat launch, which the city plans to order pre-fabricated from Frontier Log and Timber Homes, of Shelton, for $14,000. The price will include design, engineering and construction, said Pratt, though not permits, utility installation or taxes, but such fees are expected to stay well within the budgetary constraints of the grant.

“We’re not even close to using it all yet,” said Pratt, with remaining funds estimated to be around $47,000 after approved purchases have been made.

Pratt said one ambition he has for the rest of the grant funding is to place large rocks along the shore with hooks for mooring lines, so those with watercraft can park at the boat launch and proceed up or down river as they please. Other ideas discussed that night were a kiosk with signs educating residents about boating and water safety, as well as a life vest station for use by those who did not bring flotation devices.

Officials are expected to continue discussing such options as the summer continues, and the public can learn more by attending their regular meetings the first and third Mondays of the month at 6 p.m. in City Hall. 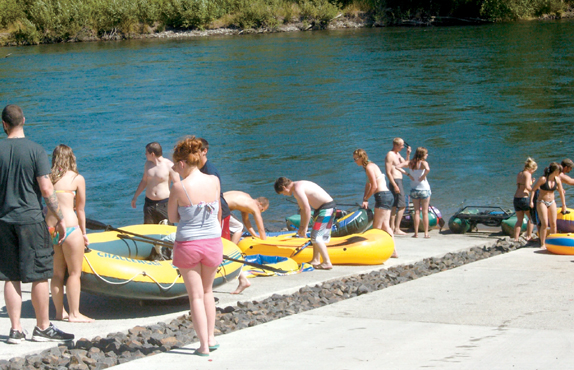 The Toledo boat launch is a popular stop for recreationalists as the weather heats, up and city leaders are hoping to improve the safety and access of existing facilities through a grant from Tacoma Power.