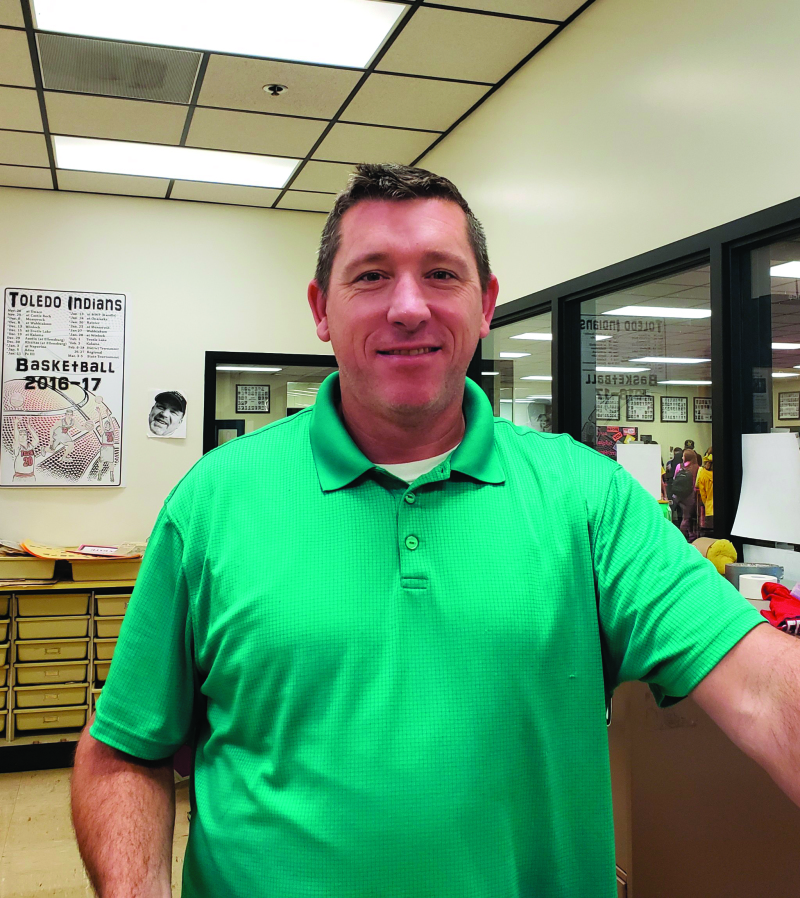 Grady Fallon has worked for the Toledo School District for quite some time now, hopping from one school to another. I interviewed Fallon about himself, and his job as an athletic director.

Fallon was born in Juneau, Alaska and moved to Portland, Oregon when he was only two years old. Fallon commented, "I finally ended up in Toledo when I was four, and I started Kindergarten in the little red house at the elementary school." He stayed at Toledo K-12.

Fallon has a wife named Jennifer, who grew up in Tacoma. He has two kids: Cooper, age eleven, and Ellie, age nine.

When asked about after highschool, Fallon replied, "I went to Central Washington University from 1995-1999, played basketball all four years and got a Bachelor's Degree in Elementary Education, with minors in Health and Coaching."

Fallon now works at an Athletic Director for the Toledo High School. "I wanted to become the Athletic Director because sports played such a big role in my life throughout high school and college, that I wanted to help make sure our kids had those experiences too," said Fallon. "Athletic events are places that the whole community comes together to support or kids and see friends. It's way more than just a contest. I like helping make sure that our fans have a good experience, too."

Fallon explains the joys of his career, "The best part of my job is helping coaches and athletes be the best they can. I get to talk with coaches about how they do things in their program, which in turn makes me better as a coach. I get to help kids see the life long benefits of teamwork, being on time, etc."

There are downfalls to being an Athletic Director, of course. "The absolute least favorite part about being an athletic director is having to correct adults." Fallon goes on to describe, "Kids make mistakes, and we are guiding them as they mature, but parents know better than yelling unsportsmanlike things at the officials. They know better than smoking or vaping on school grounds, including the parking lot. Trying to correct those things is the worst part about the job."

"I have to schedule games, officials, and busses for 11-15 high school teams (depending on JV or C teams) and seven middle school teams," Fallon comments. His job is quite busy, and you can spot him in the school building, moving from classroom to classroom, always occupied. "Athletic Director position does take up a lot of time during the day, but if you are organized and have great people helping (Suzanne, Jana, Rachel, and Sarita), we make it all work. I spend a lot of time talking and texting at home!"

Fallon continued, "The athletic director position is also a great job. It was very hard to be the athletic director and teach english at the same time. The phone, emails, and texts are constant throughout the day. It was hard to stop in the middle of Romeo and Juliet to take a phone call from another AD."

Fallon's job can be both difficult and busy, so help by students is appreciated. Fallon stated, "There are two things that athletes can do to make my job easier. First, be good sports and good people, win or lose, because no one likes braggarts or whiners in life. I am so proud of our athletes for winning the Central 2B sportsmanship award for last year."

"The second thing that athletes can do to make my job easier is to get it done in the classroom. If athletes don't have grades, then their future is bleak. But a good athlete with good grades has a bright future possibly as a college athlete, but more importantly as a positive addition to the workforce."

Fallon has worked hard to make things easier and more organized for students, as well as for coaches and parents, and therefore is greatly appreciated by the Toledo School District.