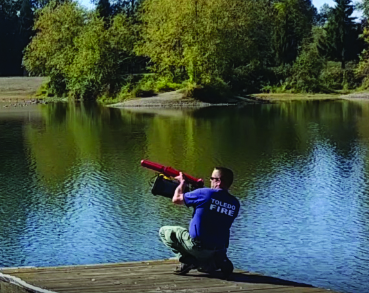 The Toledo Fire Department (TFD) is once again on the cutting edge of helping its citizens. Recently through a grant, TFD was able to purchase a ResQmax water rescue line launcher.

A ResQMax water rescue line launcher is an essential tool for water rescue. The system is powered by compressed air and can launch a line up to 400 feet to rescue someone going downstream in swift or calm water. This is ideal for a fire department on a major river like the Cowlitz.

TFD will use the ResQMax to aid in the elimination of drowning deaths and injuries to children and adults. Drowning is within the top five causes of accidental death/injury within Washington.

The ResQMax will also help keep firefighters safe; they will not have to enter the water for rescues but can use the rescue line launcher from the shore, keeping them on solid footing.

Toledo personnel have trained on the equipment several times. Although they do not want to have to use the apparatus because someone is in danger, they are better equipped to do so. Toledo continues to be a leader in finding new ways to help the citizens of their community.