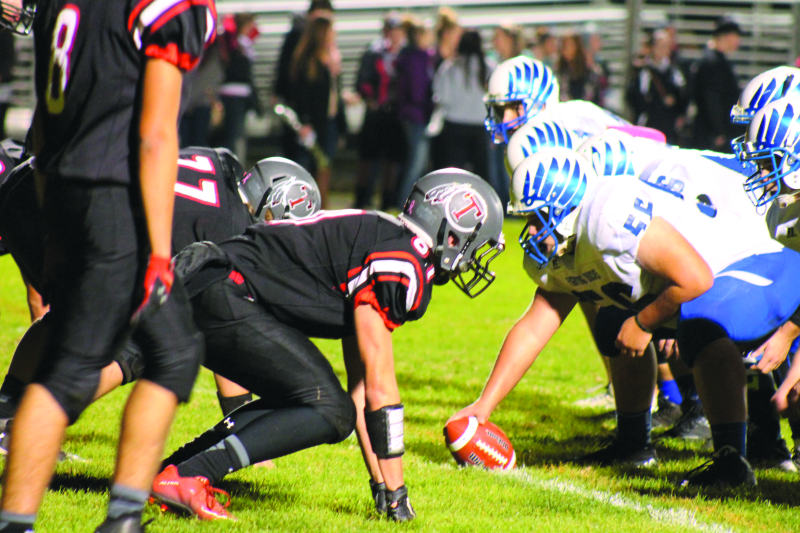 The Indians prepare to pluck the Ducks. Photo by Kennedi Collins

As the football season draws to a close, the Toledo Indians put another win under their belt. In the eventful game of October 23, the Indians faced the Toutle Lake Ducks.

Before the game started, the seniors of the fall sports seasons were recognized for their participation in the past. After the celebration and recognition, the players got ready for the start of the last home game of the season.

The game swiftly began in favor of the Toledo Indians. At 9:03 on the clock, Toledo made the first touchdown of the night. Although they made an incredible touchdown, the Toutle Lake Ducks blocked their attempted field goal kick. Toledo kept their heads high after this play and knew they could quickly get it back. At 6:15 in the first quarter, Toutle Lake made a touchdown and had a successful field goal. Battling against the Ducks, the Indians struggled to keep up. With just over one minute left of the first quarter Toutle Lake scored another touchdown with another successful field goal. This chain of events left the score of the quarter at 6 to 14 with the Ducks in the lead.

After the halftime, the teams returned to the field, ready to end the game. As the clock counted down to 9:37 in the third, Toutle Lake scored a touchdown. During an attempt at a two point conversion, the Indians quickly shut down the Duck's attempt. Keeping up the energy, Toledo scored a touchdown. Attempting a two point conversion, the Indian's had success. Putting the score to 30 to 27 with Toledo leading. The score stayed this way for the rest of the quarter.

Immediately following the start of the fourth quarter, the Indians scored the final touchdown of the night. Although the field goal was no good, the Indians held the lead against the Ducks for the remainder of the game. With no further score, the game ended with a victory to Toledo with 36 to 27.

Toledo's next game is scheduled for Thursday, October 29 in Wahkiakum. Kickoff is at 7 pm.