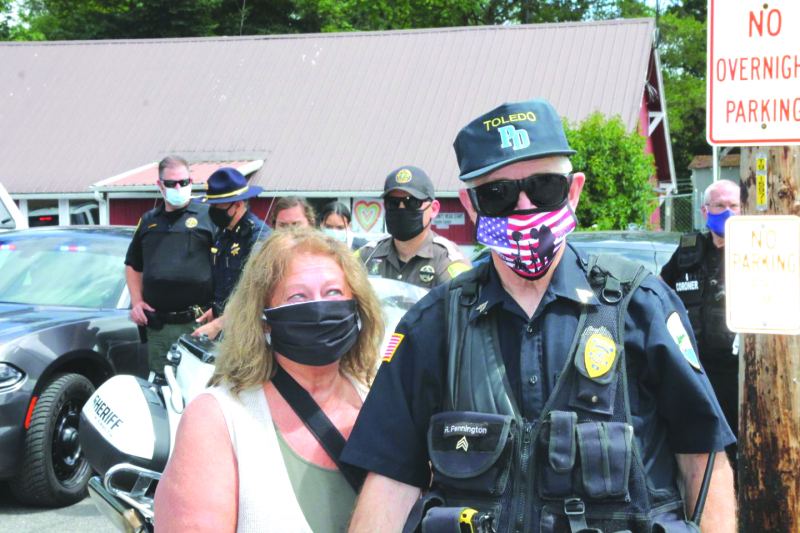 The speeches started, Officer Pennington and his wife Carrie stood side by side, Pennington still a bit puzzled looking. Then his poem, "All Gave Some, Some Gave All" was read by the organizer, Officer Pennington still looking confused as to why they were reading his poem. Then the announcement came, this was all in honor of a man who has selfishly given his time to Toledo and Lewis County. Randy is one of those very rare individuals, he gives so much to the community and asks for nothing in return. He is a true servant of the people and he does so without reservation.

Randy gives so much but it's important to remember, his wife Carrie is an important part of the team. She supports her husband in everything that he does. Thank you Carrie for sharing your husband with all of us.

Those who have worked with Randy over the years, said it best.

Sheriff Snaza stated "I have known Randy my whole career. He is an inspiration as to what a real sacrifice is. His commitment to Lewis County has been remarkable and I am proud to call him my friend. He has a passion for his community that inspires me to be better."

John Brockmueller, Chief of Toledo Police department continued the sentiment about Randy. He stated, "Randy has been an asset to the city of Toledo from the beginning of his career. He has never changed his enthusiasm for helping others not only in the city but from wherever or however he meets them. He has been an amazing example of how to be a great police officer as well as just a person. His record of volunteering for over 30 yrs is simply amazing. I would like to add he puts in almost as much time a week as a full time employee on a regular basis. Randy is simply an amazing asset to the city of Toledo and it's citizens."

Mayor Steve Dobosh stated, "Randy has been a part of the Toledo Police Department for many years. He tirelessly serves the community of Toledo with care and concern for those who live here. He gives his time selflessly, without reservation. For this, we are grateful that Officer Pennington serves Toledo."

Toledo City Clerk Michelle Whitten who has worked with Randy for many years, continued the sentiment towards Officer Pennington. She stated, "Randy is a unique individual that the citizens of Toledo have protecting them. He takes community policing seriously and isn't out there to judge, but help you through a situation. I have had the pleasure of working with Randy for over 25 years. If you ever want to hear an interesting story, just start a conversation and you will be intrigued with his life stories. Thank you Randy, you are the most deserving of receiving the recognition from so many that came out to celebrate your service."

Randy also serves as Fire Commissioner for Fire District 15 in Lewis County which covers Winlock. Winlock Mayor, Brandon Svenson also has the privilege of working with Officer Pennington. He stated, "Within the Cities of Winlock and Toledo, one would be hard pressed to find an individual that has earned more respect and admiration than Randy Pennington. Our community is truly blessed and forever better due to the hard work and outstanding character of this peerless leader."

Officer Randy Pennington is one of those rare individuals. We are very blessed to have him servicing South Lewis County. Thank you Officer Pennington for your dedication to our community. We are all forever grateful.