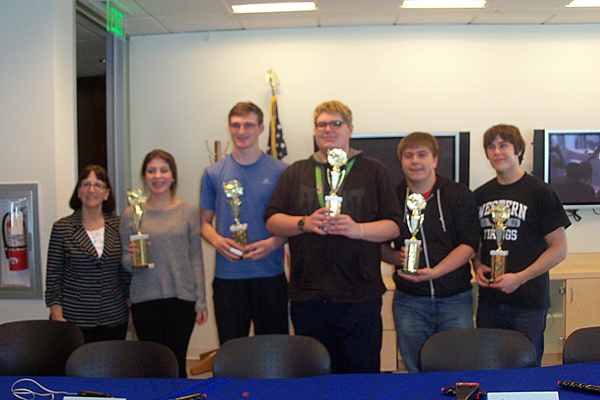 Toledo High School's Life Smarts team will be heading to nationals in Seattle this Friday and hope to place well as they represent the State of Washington. Pictured (left to right) are Coach Rene Ketchum and student participants Austyn Smith, Daniel Echtle, Adam Slighte, Aaron Bratina, and Alex Palermo. (Photo contributed by Ketchum.)

A team of students from Toledo High School will be traveling to Seattle this weekend to represent Washington in the national Life Smarts competition.

Led by Coach Rene Ketchum, the team of five students (Austyn Smith, Daniel Echtle, Adam Slighte, Aaron Bratina, and Alex Palermo) will depart for Seattle this Friday and join 49 other teams competing in categories related to consumer savvy and awareness.

"We've raked well and we hope to rank well again this year," said Smith, describing the school's trips to nationals in 2013 and 2014, which saw the team place 37th and 27th, respectively.

Smith has been a member of Toledo's team since the program was brought to the school three years ago and said Life Smarts has been very helpful in giving students a chance to network with other teams and schools, even those from across the country.

"It's nice to connect with people that aren't exactly the same as you," she said.

Of the five students on the team, each try to specialize in one of five categories: environment, personal finance, health and safety, consumer rights, and technology. The specialists then write essays in their category to be judged during the competition, while separate rounds are held to challenge the team's knowledge in each subject, as well as their application of what they have learned.

Team Captain Adam Slighte, the specialist in technology, described the competition as "a strange mash-up of Knowledge Bowl and Quiz Bowl, with some more practical questions," and said he expects this year's entry into national "will be a good trip."

When asked how members of the community can support the team, Ketchum said one immediate need is for gifts for the team to take with them, as each team is paired with a sister state with whom to exchange gifts representing their area. Ketchum said donations of any hand-made items representing Washington would be helpful, while she is also engaging local businesses to seek support.

The team also said they could use the help of YouTube viewers, as they created a short video dealing with cyber security and will be judged at the competition, among other criteria, based on the number of views the video has garnered. Those interested in watching can go to youtu.be/HEsq5icnVgA.

Ketchum said the team will know how well they ranked by the end of Monday and is looking forward to improving upon last year's scores and well-representing the State of Washington.