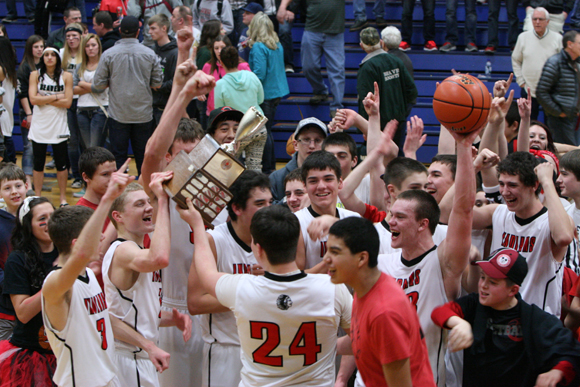 For the second year in a row, the Toledo Indian basketball team won the District IV 1A Championship with a thrilling 60-58 victory over Woodland, hinging on an accurate pass by an established star and a clutch shot by an upcoming sophomore named Colby Vermilyea .

Yes, that said sophomore. Two freshmen, Gabe Fuentes and Joe Wallace, played significant minutes on a team that has been a study in progress. The team is made up of a covey of juniors and only senior Kreed Askin saw significant playing time through the season.

After finishing fifth in the Trico League, the Indians disposed of Montesano in the first round and then pulled what many thought was the upset of the year with a chess match victory of the #1 seed Kalama.

In that game, Toledo was a nightmare for opposing coaches. Like many teams this season, the Chinooks tried to eliminate second team all-Trico League junior guard Brent Wood from having a big scoring output. Instead, no less than four Toledo players scored in double figures meeting the challenge.

“I think that our bench has gotten a ton better and us as a team brought it together at the right time,” said Vermilyea. “We put the pieces together.”

One of those in double figures was freshman Gabe Fuentes, who finished the game with 10 points. Fuentes was discovered several times all alone under the basket by Wood and McEwen.

“As the season progressed I have been playing more and more getting more experienced on the varsity," said Fuentes of his new varsity role. “I think that I have been improving a lot wanting to help my team. I am always looking for ways to score and get open in the lane. I was looking for the open spots on the floor.”

Chess masters beware, defending Toledo is like having an opposing a player with four queens on the chessboard.

Unlike last year's team, filled with skilled basketball towers, this year's versions are generally vertically challenged, with most checking in at six feet or less in height. The obvious exception is big man Donevin Merly, who spent several weeks on J.V. this year gaining valuable experience and confidence. Merly was a force on the boards against Elma with 14 rebounds.

Elma, on the other hand, was shell-shocked. The Eagles met a confident Toledo defense in the semi-final game and the Indians ran rough-shot in a 66-32 trouncing over the Evergreen League opponent. Toledo jumped out to a 31-8 at halftime and never looked back.

Next came Woodland in the championship game. The two teams punched and counter-punched until it came down to a buzzer-beater lay-in by Vermilyea and the Indians began the all-too familiar celebration of hoisting trophies and cutting down nets.

The Indians jumped to a modest 9-5 lead after the first quarter and then fell behind 22-20 at halftime.

With two seconds to go, Grant McEwen threw an 80-foot pass to Vermilyea, a receiver on Toledo’s football team, for the easy game-winning lay-up.

“It wasn't set at all,” said Vermilyea of the ensuing score. “Coach said, ‘He's gunna miss it, so chin it and lets cut down nets.’ Grant made an outstanding pass. I caught it over the shoulder [and] took a power dribble.”

There was a Woodland defender on Vermilyea's hip, so he gave him a pump fake and went up with the shot.

“He hit me pretty good, but I remember watching the ball at the bottom of the rim and rolling over [on the floor]. It was like magic. Before I could do anything it was a dog pile on Corndog.”

“We are definitely coming together at the right time,” said one of the team leaders Grant McEwen. “Everyone is playing good and together. Everyone is contributing and Brent is shooting lights out. This is the right time for everyone and everything to fall together.”

It is a great time for this to happen as Toledo begins regional state tournament play this Friday at 6 p.m. against University Prep of Seattle at Mark Morris High School.

Junior big man Donevin Merly grabbed 14 rebounds against Elma and has been a solid fixture during the District IV Tournament.