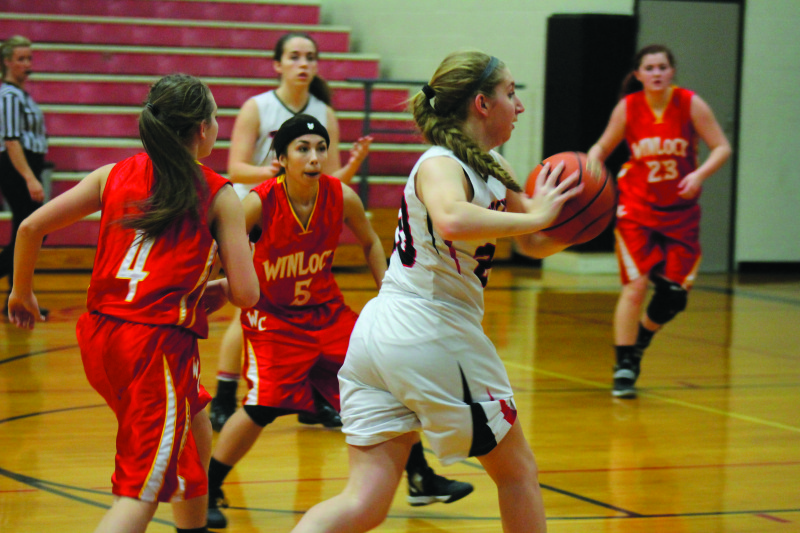 Photo by Kennedi Collins - Anna Tauscher passes the ball to a team mate as the Cardinals close in on her.

The night after the boys had faced each other, the Winlock girls made their way to Toledo to face the Indians for a game of basketball.

Right from the start, the girls showed they were prepared for whatever tricks the opposing team might try. While Toledo got the benefit of the tip off, Jazmine Ramirez from Winlock sunk a three pointer. Although the Cardinals started with this great shot, the Indians came back swiftly after points made by Josie Bowen, Haley Tauscher, and Anna Tauscher. In a small break from the scoring streak, Rianna Whitehead made a free throw for the Cardinals. After this point, Toledo continued to score on Winlock. The first quarter ended with Toledo in the lead with eight to four.

Starting the second quarter, Anna Tauscher shot a great three pointer for the Indians. The Cardinals returned this by battling back and forth between points, but once again Toledo shut the Cardinals down and boosted their score even higher. Going into the half, the Cardinals struggled behind with 11 points to Toledo's 17.

Going into the second half of the game, Toledo and Winlock resumed their back and forth points. After a few minutes of this playing, Josie Bowen and Haley Tauscher ran the score up to 29 for the Toledo Indians. At this time, there came a dilemma between the Toledo coach and one of the officials to where the official gave a technical call on the coach. With this call, Rianna Whitehead was to shoot another two shots after her first two for a foul. Whitehead continued to make all four available points for the Winlock Cardinals. These points concluded the third quarter with 29 to 18 and Toledo still in the lead.

With one final chance for the Cardinals to come back and the Indians to score more points, the teams met on the court for the final chance. The quarter started with two points to Toledo as Yvette Arroyo scored two points. Winlock retaliated this as Rianna Whitehead scored a three pointer. Haley Tauscher followed this and scored a three pointer for Toledo. After these amazing shots, Anna Tauscher and Ally Bacon dominated the game for the Indians. When the game ended, Toledo won with 44 to 23.