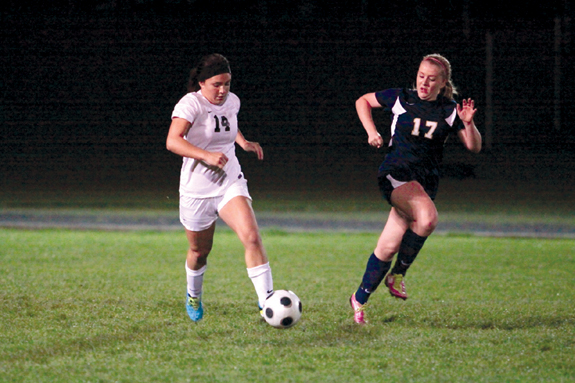 Stephanie Yoder of Toledo/Winlock United drives the ball against a Seton Catholic defender on Thursday evening. United won the game with the help of Yoder’s hat trick (3 goals).

It was quite a week for Stephanie Yoder. She scored five goals and as it turns out, her team won 2-1, and 3-2 over solid Trico League competition.

On Sept. 24, Yoder scored her first goal with an assist by Michelle Gleason during a 2-1 victory over King’s Way Christian. Yoder’s second goal on Tuesday was unassisted.

"It was intense, but we are starting to get that level of play, that work ethic that we were missing the first couple of games," said Toledo/Winlock Head Coach Horst Malnaut.

On Thursday, Seton Catholic an early goal, but then Yoder answered with a solo score in the 37th minute. Seconds before halftime, Seton Catholic was called for a hand-ball in the goalie box and a penalty kick was awarded to Yoder. Her point-blank kick was deflected away and out of bounds with a great play by the Seton Catholic goalie. That resulted in a corner kick for specialist Gleason. The kick was perfectly placed as it bounced around and off the goalie. It was then Yoder pounced and produced a goal with a perfect header.

"She [Michelle Gleason] has been working really hard on her end-swingers," (a kick that swerves toward the goal), said Yoder. "That is what she did there and it went right off the goalie and I was lucky enough to be there."

Yoder scored the 3rd goal in the 64th minute and then United was forced to play on their heels for the final 16 minutes. Goalkeeper Cecila Stalcup was lauded for making a number of saves in the final 10 minutes.

"We were under a lot of pressure and I tried to keep a couple of kids fresh," said Malnaut of his late game substitutions for defensive purposes. "We worked hard and we were trying to pace with them and they are all fast."

As for Yoder, she has amassed 60 goals in her high school career as of Thursday night, but that is surly a temporary figure.

"We have started to come together more as a team," said Yoder. "We are playing better together. We decided that we want to win and returned to the postseason. We made that decision as a team. We have kind of went from there."

If the season ends in the playoffs, T/W will need two wins over Castle Rock who come to Winlock this Thursday for the first meeting of the rivals this season.