Toledo's Moore not one to be on the sidelines 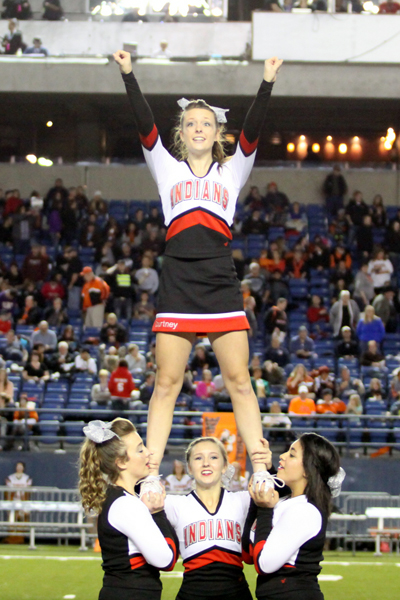 Courtney Moore, a three-sport athlete at Toledo High School, is held high during a cheer performance at the Tacoma Dome during the WIAA Semi-Finals in football. Moore is supported by Alison Bickar (left) Lauren McElhaney (Center) and Kiersten Covington (right).

Toledo's Courtney Moore went an extra step this year in athletics. Not only is she planning to play three sports through the school year (soccer, basketball and track), she was one of the first to participate as a cheerleader--and a sport--during the same season. She also scored 15 goals this fall as a member of the Toledo soccer team.

Historically, athletic governing bodies like the WIAA has frowned upon students participating in two activities like sports and cheerleading at the same time. It has forced many athletes to decide between basketball and cheer camps during the summer months even though the two seasons have often been opposite each other. Now with many shrinking schools, activities administrators are relaxing the rules so students can not only participate in cheer simultaneously with another sport, but now they are considering allowing athletes to participate in two sports at the same time (soccer and volleyball) for example.

It might have helped at Winlock High School where middle school students were allowed to play high school soccer due to a shortage of female athletes at the varsity level.

Moore has been a varsity athlete in three sports however.

"I loved playing the physical game of soccer and then under the Friday night lights get to cheer on our football boys!" explains Moore. "Getting to be in the dome was so rewarding and thrilling. The crowd gets so crazy at times. My first love is soccer you can't top that with me."

Moore also looks to be a major impact in basketball this season and nobody can deny the kind of speed that she has on the track.

When Moore graduates this spring, she hopes to continue her education in pursuit of a job in the medical field.

"I would absolutely love to play any of my sports at the next level," said Moore who admits that her skills may not be able to compete in college. "If I get to do any of my sports that would just be the cherry on top!"

Multiple years at the varsity level in three sports and now cheerleading can lead to a collection of great memories.

"I have so many great memories," smiles Moore. "I think my favorite memory is this past soccer season was helping my team make district playoffs against Life Christian. It was my first time going. It was a wonderful opportunity with all the amazing girls. This past year was also my first time going to districts for track. I hope to go next year as well. Making it to the dome as a first time cheerleader was exciting. Seeing the Toledo community filling the stands was astonishing supporting Toledo athletics."

There have been ups and downs in her sporting life said Moore. There are wins and losses, great experiences and ones that can be very difficult.

"All my family has been there for my wins and losses," she says. "They always know what to do and say to bring me back up after tough loss."

Clearly, nobody can ever accuse Courtney Moore of sitting on the bench of life. If there has been an opportunity, she has certainly taken it.