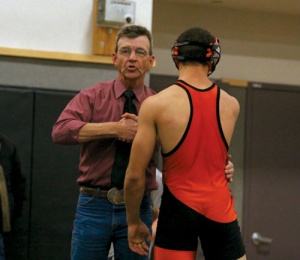 TWO Head Wrestling Coach Pat Jones (left) congratulates a Napavine wrestler after a match with one of Jones’ students. The coach submitted his resignation March 20 after leading the program for eight successful years.

Originally a team of Winlock and Toledo students, Onalaska joined the program under Jones’ leadership in 2008 and participation swelled, with 18 students competing in the ’12-’13 season.

During the Mat Classic (state championship) at the Tacoma Dome last month, eight TWO students participated with Rachel Archer and Marco Bautista winning first place in their weight categories and Tony Raupp placing third. Archer herself recently signed a letter of intent to wrestle for Oklahoma State University after her career of championship wins with TWO.

In his letter of resignation to the board, Jones thanked them for the time he was able to spend as head coach and left advice for the future leadership of the program.

Gaul Throws Perfect Game for Warhawks
Toledo High School Senior Mack Gaul threw a perfect game in the first contest of a doubleheader against Ilwaco March 19 in a steady rain.

Gaul struck out 12 batters as the Warhawks trampled the Fishermen 11-0 in five innings.  He also hit a home run in his first at bat.  T/W had 14 hits in the game that included three by Conner Vermilyea and Wesley Kuzminksy while Joel Martin and Enrique Hernandez both had two hits.

In game two, Gaul hit a triple while Martin and Chris Gove each went two for three at the plate. Colton Korpi added two RBIs.

On Friday, the Warhawks dropped a non-league grudge match to Mark Morris by the score of 7-5.  T/W is now 4-3 on the season and 3-1 in the Trico League.  They are scheduled to host a doubleheader with Woodland on Tuesday and then a non-league game against Adna on Friday.

Lady Warhawks Win two
The Toledo/Winlock fastpitch team collected two victories over Ilwaco on Friday with 13-2 and 7-2 advantages in a reschedule doubleheader.

Shelby Davison struck out 11 batters and allowed just three hits during the first game. During the second game, The Lady Warhawks knocked out 12 hits with Kennedi Collins accounting for two of them and one of those was a triple. Stephanie Yoder had two hits including a double. Davison and Cassie McGeary each had two hits in game two.

Toledo/Winlock is now 2-2 and 2-0 in the Trico League and are scheduled to play at Woodland on Tuesday.

United Soccer Scores First Victory
Assisted by two goals from Fernando Munoz, Toledo/Winlock United earned their first victory with a 4-3 decision over King's Way Christian in 1A Trico League action on Tuesday. Munoz also assisted to Isaiah Johnson with one of his two goals in the win. Raul Plancarte, Zack Debo, and Adair Garibay were all credited with assists in the contest. United soccer is now 1-4 on the season and 1-2 in the Trico League and will host LaCenter in Winlock on Tuesday night and Castle Rock on Thursday.

Castle Rock Baseball Tops Kalama in Thriller
It was either heartbreak or heart attack depending which side you chose to follow. Kalama jumped to a 10-1 lead over Castle Rock but the Rockets stormed back in the bottom of the 7th inning and claimed an eventual 13-12 Trico League victory on Saturday.

Andy Voelker went 3 for 4 with a double and three runs scored while Carson Horton went 2 for 4, and contributed two runs). Not to be out done, Robbie Simpson batted 2 for 3, earned a double and scored two runs.  Nick Harriman was also responsible for two RBIs.

Later in the afternoon, CR dropped an 11-5 decision to Lynden Christian.

Castle Rock is 3-2 on the season and 3-1 in league play.  The Rockets are scheduled to play a double-header in Ilwaco on Tuesday.

Castle Rock placed second in the boys meet that was dominated by Kalama as a team. Toledo placed 3rd among the four teams represented. In the girls competition, Castle Rock was second to Kalama while Toledo was 4th.

In some cases, the biggest competition for Castle Rock was other Rockets. Take for example the girls 100 and 200 meters where Elizabeth Moore defeated her teammates Laura Patrick and Mikayla Risner. Patrick returned the favor in the 200 meters but Moore was dominant in the 400 meters. Amy Patrick sailed away from the competition in the 1600 meters

In the field events, CR's Maggy Ashby won the discus with a throw of 82'10".  Austin Moore won the boys 400 meters and high jump for CR and the 4 X 400 relay team made up of Moore, Pacer Said, Jacob Wilbur and Jesse Althauser defeated the other three teams in the field.

Toledo was at the same four-team meet and had several winners as well. Sprinter David Comnick won both the 100 and 200 meters. Amanda Navolynski won the girls pole vault in dreadful weather conditions.

Meanwhile, Winlock’s Chance Fisher won the high jump at a meet at Toutle Lake on Thursday with a winning jump of 6'1". 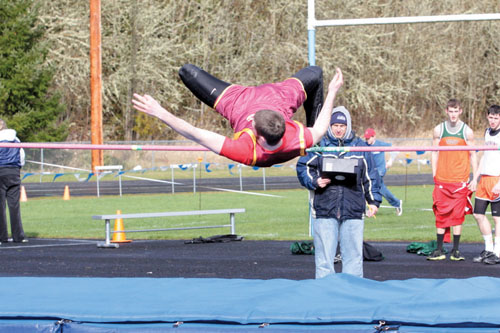 Winlock’s Chance Fisher soars over the high jump bar in Toutle Lake on Thursday, winning with a 6’1" jump.