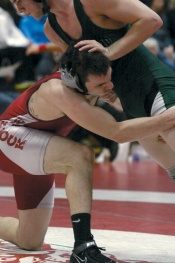 Winlock Senior Dakota Delaney begins the process of picking up a wrestler from Woodland during his second match on Thursday.

Sometimes, the final score of the contest isn't the whole story.  Such was the case when the Toledo/Winlock/Onalaska wrestling team defeated Columbia (of White Salmon) 51-37 and Woodland 51-41 in a double-dual wrestling meet at Castle Rock Thursday night.

Several TWO wrestlers competed at a higher weight class to fill a category, challenge a better wrestler or just to compete at all during the competition.

"I have guys wrestling all over the place to fill weight classes," said TWO Head Coach Pat Jones.

Several TWO wrestlers dominated their single match during the evening, illuminating the feast or famine pitfalls of wrestling at the small school level. Winlock's Rachel Archer only managed about 45 seconds of wrestling before pinning her opponent while Toledo's Sam Holbrook pinned his in 26 seconds. Tony Raupp used his opponent like he was in a high level wrestling class, watching and listening to his coaches as he followed their instructions ultimately leading to a pin.

Only Onalaska's Derek Fruin seemed to get a lot of high-quality, bite your nails grappling experience as he wrestled up at the 152lbs class and had to come from behind in both matches.

While two-time defending state champion Archer is somewhat of a legend in the region, Sam Holbrook is quietly racking up quite a good season. His eye, of course, is on state as he humbly gives his record as "13-1" on the season.

"I am trying to work hard in practice to be a better wrestler," he said. "Kalama is pretty tough and there are some good wrestlers at Stevenson.”

"He is undefeated," he said.  "His one loss was by injury default, and you don't count that as a loss. He has been fighting a high ankle sprain much of the season."

In just his second year of wrestling and his first year since moving to the local area, Winlock's Dakota Delaney is starting to show the fruits of hard work in a young career on the mats. Wrestling up in the 160lbs category, Delaney pinned his White Salmon opponent. He has had five wins on the season and all of them have come via pin.  Delaney says that he has learned a lot from Coach Jones since coming to Winlock.

"He has taught me to stay calm and not get tired in the first round," said Delaney.

In his second match of the night with a Woodland opponent, Delaney was looking good again but he picked up the wrestler and threw him down with "excessive force".  The ref called the throw illegal and declared the Woodland wrestler the winner.

"It was borderline," said Jones. " I am not going to get upset with the kid because I have been trying to teach him to be more aggressive."

Regardless, progress is being made with the TWO athletes said Jones. Many of his grapplers had competed just 24 hours earlier at a mix and match in Wahkiakum but like most wrestlers, Jones is looking down the road at the WIAA Mat Classic in Tacoma.

"We wrestled pretty flat for the most part," he said. "Coming off a meet last night and a hard practice the night before after I discovered many of them returned from vacation out of shape."
Read more from:
TC - Sports
Tags:
None
Share: