UPS worker arrested for stealing an estimated $100,000 in electronics 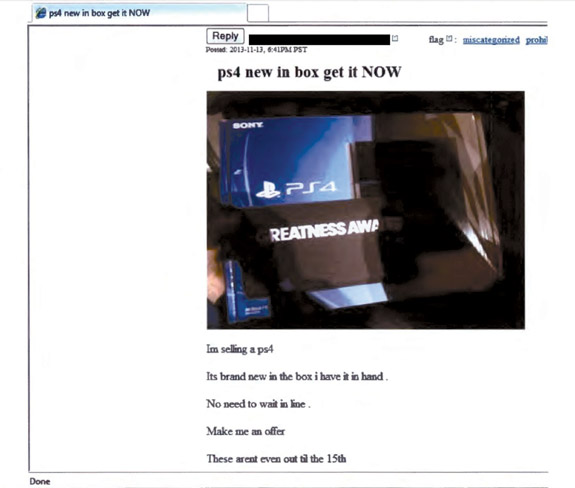 A screenshot of a local Craigslist ad identified by UPS security of a Playstation 4 posted Nov. 13, two days prior to the system’s release date. Three PS4 systems were among items stolen from UPS and suspected taken by Roland Camps, a former employee.

A Winlock man has been arrested for stealing an estimated $100,000 worth of electronics from UPS over the last four months, and appeared in court on 18 felony charges Dec. 3.

Roland E. Camps, 40, was taken into custody Dec. 2 following an investigation into shipments of cell phones, video games and other electronics stolen since Aug. 9, according to the Lewis County Sheriff’s Office.

UPS had contacted investigators last month and explained shipments bound for such retailers as Fred Meyer and Game Stop did not arrive as scheduled, including Playstation 4 consoles, Wii U consoles and equipment, various video games, Apple iPhones and Samsung Galaxy phones.

At the time of the initial report, UPS said the phones alone cost around $48,000, and an inventory of the other items could bring the total loss to around $100,000, according to charging documents.

It was learned through investigation one of the stolen phones had been activated in Lewis County, though others had been reportedly activated across the country. Detectives made contact with a 19-year-old Winlock man in possession of the phone, who stated Camps had sold it to him in September for $100, offering him a choice between Apple and Samsung. The phone was subsequently confiscated as recovered stolen property.

Camps had been known to investigators as a UPS employee working since December of 2011 at the UPS distribution center on the 100 block of Hamilton Rd., north of Napavine.

Detectives contacted Camps via telephone Nov. 26 and he admitted to stealing two of the nine shipments of missing cell phones and said he had mailed all, but the one sold locally, to relatives on the east cost for sale online. However, he did not admit to any of the other thefts, according to reports, and insisted he had no local accomplices.

Detectives asked Camps to turn himself in immediately, but they were later contacted by attorney Robert Brungardt who insisted his client would be willing to surrender himself after the holiday weekend on Dec. 2, which Camps eventually did. At that time he was booked into the Lewis County Jail for theft, first degree, and trafficking stolen property, first degree.

Prosecutors have so far filed 18 counts (nine for each charge) related to nine boxes of cell phones reported stolen from UPS, and as many as 18 more counts could be added as additional information is received from UPS. Each count carries a maximum of 10 years in prison and $20,000 in fines.

In a preliminary court appearance Dec. 3, Brungardt conceded his client had already admitted to stealing two of the boxes of phones, but directly refuted charges related to the other missing electronics.

Camps is expected to appear in court again on Dec. 12 for arraignment and is currently released on a $10,000 bond. His previous encounters with law enforcement include convictions for third-degree theft in 2001, identity theft in 2002, and vehicular assault in 2007, according to court documents.