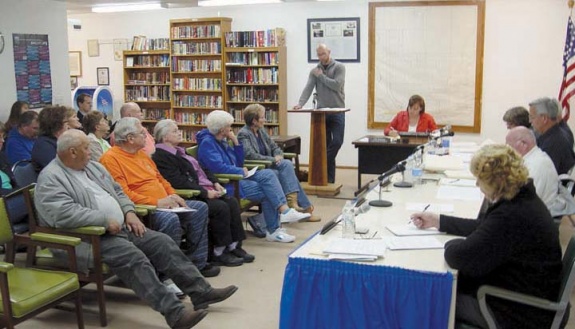 The Vader City Council is seeking a moratorium against recreational marijuana facilities as they explore possible regulations for such businesses, in light of a proposal to bring a growing and processing facility into town.

Seattle developer Brandon Milton spoke to the council during their Oct. 15 meeting about his plan to apply for a recreational marijuana license later next month and eventually establish a processing facility in the city’s industrial district.

Word of Milton’s intentions has prompted strong statements of opposition from public leaders in recent weeks, though arguments on both sides of the issue were heard as residents spoke of the proposal that night.

"I would like to urge the mayor and council to think about industry," stated local businesswoman Judy Costello, who asked officials to think about how a marijuana facility could impact Vader’s growth in the future. "I don’t care one way or the other about the product. I care about the business coming to town."

Business owner Jason Dailey, who owns a restaurant directly across from the industrial district, also showed support for Milton’s proposal as a chance for Vader to get back on its feet, stating money paid by the state next year for marijuana production has to go somewhere.

"I think it’s a good opportunity for Vader," he said.

Still, others have contended a marijuana plant will only harm the city’s already-delicate image amid efforts to stamp out drug use, and will encourage deviant behavior and an increase in drug-related crimes.

Resident Bob Foster said, in his work with at-risk youth, he has learned marijuana is a universal starting point for children who develop serious drug problems later in life, while former schoolteacher Shannon Olson said she believes the potential benefits a marijuana facility could bring to Vader do not outweigh the costs.

"For us to be having a business that’s raising something that was illegal a few years ago concerns me," she said. "For how it makes our community look, for how it looks to my children, and the kind of people that it brings into the community."

Facility on the up and up, says Milton

Milton has said he is aware of concerns that his proposed facility may have a negative impact on the community, and said it helps to consider this potential business more as a professional distribution facility rather than the illicit pot forms residents may be thinking of.

"Not a single ounce of marijuana produced in this facility will be sold in Vader," he said, adding the property is required by the state to be secured from potential thieves and to practice strict hiring guidelines, as well as keep close track of all marijuana material entering or leaving the facility. "The state has set up an exhaustive system of security cameras, fingerprinting, background checks, all that stuff…There’s really no opportunity for product to end up in the wrong hands. It’s a very tightly-controlled, tightly-regulated industry."

Milton also said he sees his proposal as a chance to establish a number of high-paying jobs in the area, as the marijuana industry is expected to produce millions of dollars for individual producers, with Milton estimating producers at the level for which he is applying will likely earn $5 million in their first year.

"We have a chance to have a positive reputation here in Vader as a place with solid families backed up by a solid economy," he said, stating his desire will be to offer competitive wages and benefits to employees, as well as use profits to continue developing Vader’s 30-acre industrial district, which is currently owned by Milton’s company MPM.

When asked how many jobs may be produced if his facility were to be established, Milton pointed to

marijuana producers in Seattle who have been growing the plant for dispensaries and said a 10,000-square-foot, outdoor facility will typically require 10 employees. He said his plan for his facility is to have 30,000 square feet of growing space, primarily outside during the first year, with processing taking place in the 15,000 square foot warehouse already on the property. When pressed to offer a specific estimate for jobs created by the facility, Milton declined to give an exact figure and said he could only speculate at this time.

Once able to reinvest his profits in the development, Milton said he would like to have all growth taking place indoors, as he said indoor operations are four-times as productive and also produce around four times as many jobs. He also indicated in his presentation he may be interested in establishing at least one more facility on the property once the state begins opening opportunities for more licensed facilities in the future.

Milton said a development such as this could potentially increase his property’s value to around $2.5 million, leading to a potential annual contribution of $6,787 to the city’s property tax revenues. He also said sate law would allow cities like Vader to take a percentage of taxes levied on marijuana shipped from the facility, though he indicated that percentage has not yet been set by the state.

But for all the benefits presented to the City Council that night, officials’ responses to Milton’s proposal have ranged between timid support and robust opposition.

Council Member Kevin Flynn continued to insist, legal or not, marijuana is a morally-objectionable substance, and pointed out strict security regulations currently in place may become more lax as the state eventually provides more opportunities for growers in the future.

"It’s morally incorrect," he said. "We are basing our livelihood on something that was against the law just a short period of time ago, and whether that law is passed now or not passed now make no difference."

On the other hand, Council Member Janet Charlton said she is more inclined to side with residents such as Costello and said the important issue for the council to consider is how to bring more businesses into town.

Council Members Andy Wilson and Linda Newton did not offer perspectives for or against the proposal and merely asked questions of Milton, though Wilson has previously voiced objections during recent campaign appearances. Newton said she was primarily concerned about the potential for pesticide use and how it may affect individuals such as her who practice beekeeping and other environmentally-sensitive hobbies.

Milton said he was attentive to such concerns and interested in seeking what would be in the best interests of community members.

"I certainly want to be sensitive to bees and other environmental impacts," he said. "I’m interested in making this work for the community."

Milton said the ways his facility could benefit the community as a whole will likely come in the form of dollars set aside for law enforcement and drug prevention and treatment.

He said deliberate efforts will be made with marijuana tax money to help prevent minors from obtaining the drug, as well as contribute to the agencies who fight such problems. He added Vader may also benefit locally from revenue generated by his business and could even see new facilities dedicated to fighting addictions to marijuana as well as meth and other drugs habits.

"Why can’t we put a drug prevention center right here in town?" he said. "We could add a couple more jobs to run that center. We can give people a local resource to get off drugs, get information out there and help people."

He added it is his impression the drug problems in and around Vader will be curbed when families have a stable job source to rely on, both in the form of the marijuana facility and other businesses it brings to town.

"I’m not going to attempt to change everyone’s mind about marijuana," he said, acknowledging the differences in opinions still existing in the area, but said he encouraged residents to consider a growing trend of support for recreational marijuana use, both in Washington and across the country. "Attitudes about that are changing and changing fast. Witness our latest election. That’s why it’s legal right now. Attitudes have changed on this."

The council has scheduled a workshop for Nov. 2 at 10 a.m. to further discuss their options when it comes to potentially regulating recreational marijuana facilities.

Milton has suggested they add marijuana production to the city’s accepted uses of industrial property, as this would help his application with the state move quicker when he applies Nov. 18.

He also advised the city could create a permitting process regulating marijuana facilities, though the Federal Government would see this as the city officially endorsing marijuana production and distribution and could potentially deny the city funding. He additionally said the city retains the option to do nothing and allow Milton and other developers to establish their facilities unimpeded.

Buzzard further advised, while Vader could add to state regulations on how and where recreational marijuana facilities can be established, officials cannot contradict state law, meaning they cannot pass ordinances or regulations disallowing such facilities, either directly or indirectly. If they do so, he said they may be subject to suit by developers as licensed marijuana production is now legal.

When presented with the possibility of a moratorium on marijuana facilities, which the council has yet to officially pass, Milton commented, "You guys need to let your play out in a way that makes sense to you."

If the council does pass a moratorium, likely during or after their Nov. 2 workshop, Buzzard said it would not prevent Milton from being able to apply for his license with the state.

If granted his license, Milton has said he wishes to begin outfitting his property for marijuana production as soon as he is able, saying the state has a 40-ton marijuana quota they are wishing to meet through all producers next year and will expect him to make good use of his license if it is awarded.

His property remains under-developed and its existing warehouse is lacking water and sewer utilities. In light of the recent denial of a county grant to complete utility installation, Milton has not indicated when he expects the project to be completed or where funding will come from, but has said he intends to seek the grant again when the funding cycle opens up again later next year.