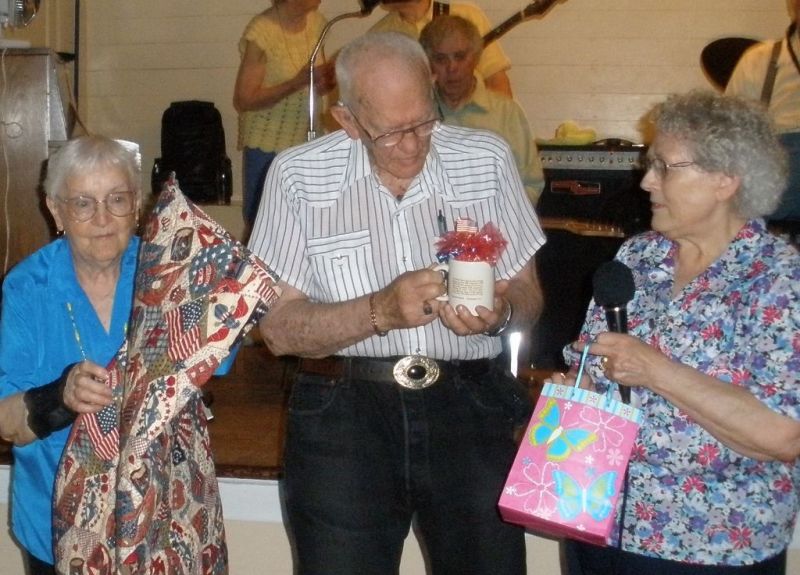 Photo by Steve Eymann Darrell Dow (center) holds a commemorative mug depicting the flag placement at Iwo Jima, while his wife (left) holds a quilt presented to him by Virginia Wallace (right).

For Americans, the name of this tiny island in southern Japan stirs memories of one historic moment captured on film and memorialized in bronze, stamps and other media over the past 70 years.

The site, and sight, of the American flag as it was hoisted atop Mt. Suribachi by five Marines and a Navy corpsman.

For 89-year-old Darrell Dow of Onalaska, the place brings other memories as well.

"No sleep. No changing clothes. No baths," Dow recalled during a June interview. He was with the 3rd Marine Division, C Company, Combat Engineers, doing demolition duty: "Blowing stuff up," he explained, "caves, bunkers, like that."

An observer commented, "Not a safe job."

The tall, slender gentleman, slightly stooped now and white of hair, was 18 years old when he joined the Marine Corps on Dec. 15, 1943. After training, he was sent to Guam where fighting was intense between American and Japanese troops.

"They told me what outfit I was going to be with right there on Guam, but I didn't know where they were at or anything. There were a lot of people around but no one knew anybody. You had to find your unit on your own. It took me a while to find them. They were in combat, see, and there was no base (to report to)."

Darrell spent 16 months on Guam before going to Iwo Jima.

As a result of that assignment, on Feb. 23, 1945, he witnessed the placing of the American flag and even had a significant, although unsung, role in that historic event.

"My outfit, we didn't go in as a unit. We were stationed in one spot and if they needed a demolition man, then you went out and did it." Thus, when a pole was needed to hold the flag, Dow got the job of finding one.

"They (the Japanese) had a reservoir set up on top (of Mt. Suribachi) to catch drinking water. It ran down into a cave. We just took (the water pipe) apart, sheared off a section of it and that's what they hung the flag on. That became the flag pipe. That's the pole you see in the picture."

When the flag first went up, Dow recalled that "all the ships anchored out at sea, their horns started blowing, everyone was crying."

Dow noted the historic photo memorializes not the first, but the second flag-raising at Mt. Suribachi.

"A U.S. flag was first raised atop Mount Suribachi soon after the mountaintop was captured at around 10:20 on February 23, 1945," according to a Wikipedia history of the event. "This flag was too small, however, to be easily seen from the nearby landing beaches."

The history adds: "The roar of the Marines and sailors off shore and on the island, and the blasts of the ship horns alerted the Japanese, who up to this point had stayed in their cave bunkers. The Marines and corpsmen on Mt. Suribachi found themselves under fire from Japanese troops, but (the) Marines were able quickly to eliminate the threat."

The 3rd Marine Division history describes Iwo Jima in this way: "The terrain, ideal for defense, was heavily fortified by pillboxes, caves, and covered artillery emplacements. Progress was slow and casualties heavy during the first few days of fighting."

"In my outfit we had 175 (before Iwo Jima) and 15 of us made it back. I was the old man of the outfit at 19 years old. I think what bothers most is losing your friends."

He and his wife, Naomi - who are both Onalaska natives - were high school sweethearts from his sophomore and her freshman year. When he got home, "I went to barber school through the GI Bill of Rights," Dow said. "I bought the barber shop before I got out of barber school. The barber there wanted to retire and I bought his shop.

"I was there 42 years and missed 42 days of work. One day I only made a dollar. That's when a haircut was a dollar," he laughed.

The Dows raised three sons - Bob, Rick and Carl - and celebrated their 69th wedding anniversary this spring. "We're still living in the same place," he said.

The Dows enjoy dancing and for 40 years have been attending dances at the Swedish-Finnish Hall in Rochester. It was at a similar dance that Dow's World War II experience became known to Virginia Wallace of South Bend, who also goes to dances there. The widow of a military man, Wallace wanted to honor Dow's military service. On June 6 Wallace presented Naomi with a handmade hardanger bookmark made by Wallace and Darrell with a patriotic quilt from the Willapa Harbor Quilters.

Seventy years later, it's a small token for a job well done at Iwo Jima.