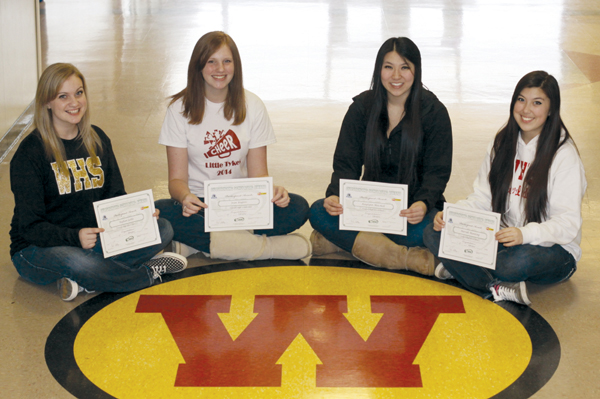 The Winlock High School Winter Sports Cheer Team received an Outstanding Team Award from the WIAA due to their collective GPA of 3.7 out of 4.0). The team members include (left to right) Reghan Goble, Jean Kupers, Kaylynn Mitchell and Mariah Manning.

The Winlock Winter Sports Cheerleading team had been recognized for their scholastic achievement by the Washington Interscholastic Activities Association (WIAA).

The team received an Outstanding Team Award because they have a collective grade point average of 3.7 out of a possible 4.0.

"I don't remember the last time any team (at Winlock) has received this award," said WHS Cheer Advisor Hedy Mitchell.

Like any athletic team, these girls not only move and stunt but they create cheers, chants as well as dance routines that require teamwork.

"I don't think that the public realizes that they have 120 cheers and chants in their mind every night and these particular girls were turning out a new dance routine every two weeks," said Mitchell.

Excellent grades means that each individual is a reliable teammate.

"It is less stress on me personally and on everyone else to not have to worry about that," said Manning, a senior, of the overall achievement of the girls.

Good grades mean that every member is academically eligible in every activity. Every coach and team worries about one or more of its members that may not able to participate because of low grades.

"We go out there and do our stuff. We don't have to change our formations. It is easier on us," says Manning.

"They have all seven periods each day and three or four of them are full college level classes," she said.

Kaylynn Mitchell, Goble and Manning all say they help and encourage each other a lot as students.

"I am in classes with Reghan and I help her and she helps me with homework," said Kaylynn Mitchell, the advisor's daughter.

Kupers had a particularly difficult scenario to work with. She is a Running Start student at Centralia College, so most of her time is spent away from her teammates.

"Me being off campus it is kind of harder because I don't see them during the school hours," explained Kupers. "The only time I ever saw them was at practice, but they are very encouraging of me and my grades and everything that is happening at the college."

The girls are almost surprised at the recognition they received from the WIAA.

"I think with all of our personalities, we have always expected good grades from ourselves," said Manning.

"We wouldn't expect anything less of ourselves," said Kaylynn Mitchell.

The younger Mitchell also repeated her advisor’s philosophy about being a member of this particular team.

They are daughters first, students second and cheerleaders third.