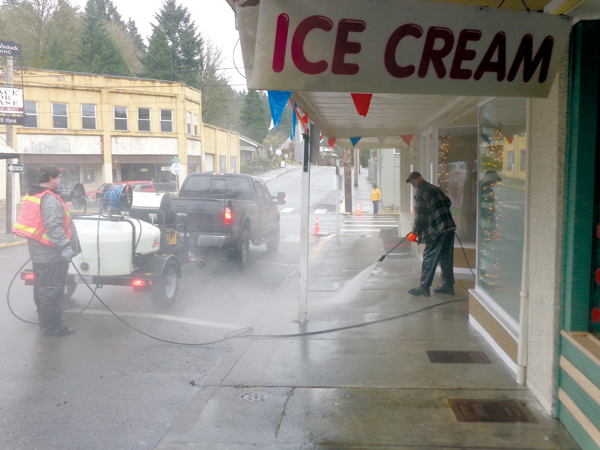 Volunteers Travis Wallin (right) and Tater Pilz (left) operate a power washer provided by Tyler Rentals with the help of Dave Nelson in the pickup.

A number of eager young hands joined those volunteering to help cleanup Winlock Saturday during the second ongoing Clean Up the Coop event.

The volume of children joining their families was not without notice, including those who helped tackle a large patch of briars on Kerron St. across from the Community Building, as well as those picking up garbage along the railroad tracks.

Organizer Viola Chickese said she was uncertain what the headcount had been, as volunteers had already dispersed earlier that morning to tackle the day’s projects when she arrived. She did note attendance appeared to be no less than last time, when around 40 people participated.

In addition to an influx of families, heavy equipment was contributed to help clean up the streets and storefronts, including a large pressure washer provided by Tyler Rentals and a street sweeper from Winlock True Value Hardware.

While weather remained inclement, though rain this time rather than snow as with last month’s cleanup, volunteers are still expecting to continue and hope for clearer skies during the next cleanup event April 12. For more information, contact Chickese at (360) 785-0178. 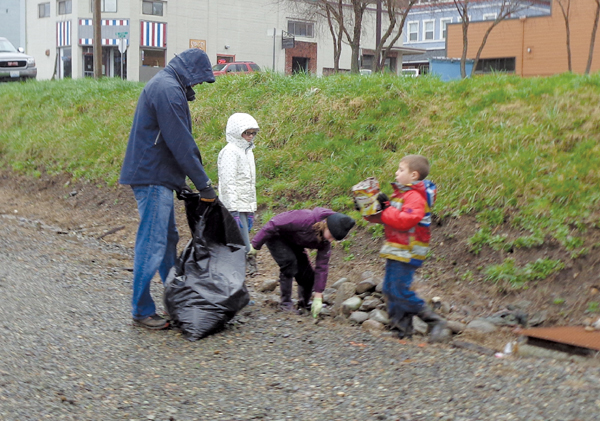 The Lamghaim family (Ryan, Isabel, Taylor and Cole, left to right) help clean up trash along the railroad along with many other families helping clean up Winlock Saturday.

A number of volunteers, both young and old, tackle a large patch of briars across from the Community Building. Families participated in large number during the event.