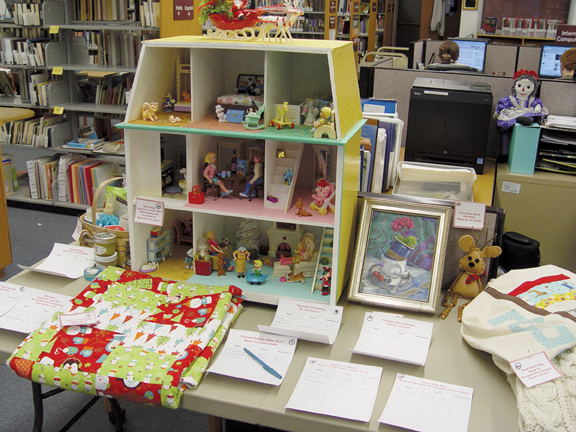 A number of items are available for bidding right now at the Winlock Timberland Library as part of their annual silent auction fundraiser, held to benefit programs organized by the Friends of the Winlock Library.

The annual silent auction at the Winlock Timberland Library has started and will be running through Nov. 27, the day before Thanksgiving.

The largest fundraiser held for the Friends of the Winlock Timberland Library, the auction features handcrafted items donated by local library supporters, and additional donations can be accepted until the auction is over.

It was reported during the weekend more than $800 in bids have already been offered so far, not including cash donations made directly to the library—more than half way to last year’s total of $1,400 raised during the auction.

Items featured this year include everything from oil paintings and photographs, to quilts, dolls jewelry, a spa getaway and even hand-tied fishing flies.

Recurring items were also present this year, including a large dollhouse refurbished by Librarian Barbara Lewis and her husband, as well as goat milk soap bars sold individually by Library Manager Jamie Allwine.

Those who bid during the auction will be told of the results by 2 p.m. Nov. 27, but there will be no rush to pick up the items immediately, stated Allwine. One bidder said this is a popular time to pick up Christmas gifts for his family, adding he is a frequent visitor to the annual event.

All proceeds will be used to fund ongoing library activities, and those with questions about these programs, as well as how to donate an item for sale, may call the library at (360) 785-3461, of visit their location at 322 NE First St. in Winlock.

Upcoming library events include May the Oods Be Ever in Your Favor, a Dr. Who/Hunger Games celebration held Nov. 19 including games and crafts, and Snowflake Day Nov. 30, where children can cut, quill, and curl to make gorgeous paper snowflakes.