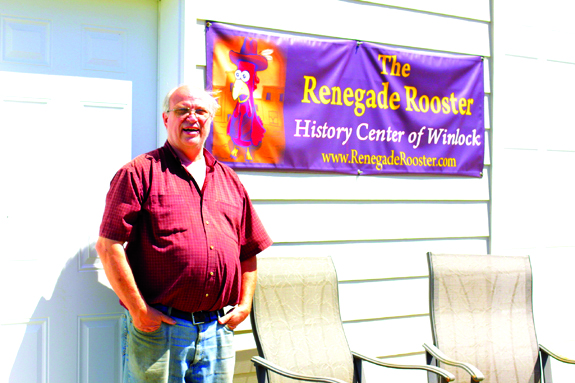 When you think of Winlock and our history, you automatically think of Roy Richards. Roy passed away at home this past week and Winlock lost a man who loved this town more than most. His love was shown in every piece collected for his museum and every time he opened the door to someone new.

Roy was the owner of the Renegade Rooster museum. He recently purchased the old Pastime Tavern and called it Roy's Place. Roy was a lifelong resident, he truly loved Winlock and the people who lived here. This is Roy's story, told by those who knew him best.

With the passing of Roy Richards, it is hard to put to words the void that he leaves. He is one of those guys who has just always been around. Before the days of internet searches, if you wanted to know just about anything Winlock related, he was the go-to guy for answers. A walking encyclopedia of days past. He knew the lineage of the long-established families. He knew whose farm was where, and what business occupied what storefront downtown. Roy was not just a collector of Winlock artifacts. He was passionate about Winlock history. He was the self-appointed custodian of Winlock's history, and as any good steward of such artifacts would do, he created a home for their safekeeping. In the 2000s he employed Mr. Voie to build a structure to safely archive that which he had curated over the years. Not just some storage shed, but a temperature/humidity controlled building that we know as his museum. It's hard to imagine how many hours he spent seeking out the Winlock related artifacts, in an effort to bring them back to their hometown. Or the hours he spent arranging the displays. He wasn't just an avid collector. He was, as mentioned earlier, passionate.

Most of this you already know. But have you ever really thought about why Roy did all this? What was his motive? He obviously wasn't in it for the money. It was his own money spent to build and fill his museum. And he was happy to open the doors for you for free. Not only for free, he'd give his guests treats. A soda pop from his vintage cooler. A pepperoni stick if you'd like. Nor was he in it for the fame. No, his motivation was unselfish. He did all this work so that he could share. He was eager to share it with whoever would take the time to stop in. He encouraged field trips of students from the school. He was so enthusiastic to simply share our history. A tour through his museum would, for a moment, make you forget the outside world as you were transported in your mind back to days gone by. For Winlock natives, you'd have fleeting glimpses of snapshots of your youth. If there were a jar to put a penny in for every time someone would say "I remember" that jar would be overflowed.

That's the legacy of Roy Richards. Sharing. We all have busy lives, and as the rhythm of our lives went on, punctuated with events like Christmas, weddings, or summer vacations, Roy has patiently waited for us to come by so that he could share a trip down memory lane. Too many of us have said, "someday I'll have to stop in there". For those who did make the time, you can count it as time well spent. For now, although the museum is still full, it is also very empty without the animation of its knowledgeable curator Roy Richards.

Roy was my good friend. We worked together at Gootee's Chevrolet. Everyone became like family there. Whenever we ran into each other we'd talk about the great memories of that time. I'll miss him.

The Class of 1967 would like to comment that he was one of our best and he always made our feet happy as we danced to his guitar music and watched him smile as he saw us all having a great time.

Being a lifelong resident of Winlock, I have known Roy my entire life. I can't place the first time I met Roy. Just seems like he was always here. I played music with him on a few occasions which were always fun. Roy was always willing to help anytime I asked. His work on putting together Winlock's history for current and future generations to cherish is such a fantastic gift. Roy was a very charitable guy. Will be greatly missed.