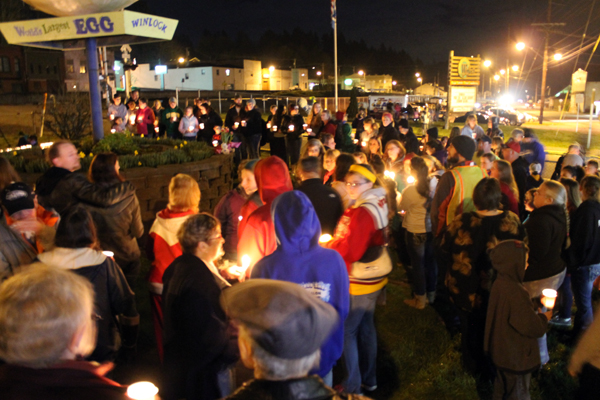 Dozens of local residents gather in Vern Zander Memorial Park Thursday night for a candlelight vigil to remember three victims (a mother and two daughters) of a family of six who perished in a house fire earlier that day, as well as the survivors (a father and two sons) who have been displaced because of the blaze.

Members of the Winlock community gave a strong showing of support during a candlelight vigil held Thursday night to remember a family who lost loved ones during a house fire earlier that day.

A large crowd gathered around the World's Largest Egg at Vern Zander Memorial Park, but not for celebration as they have in the past. They instead spoke of the importance of family and community, and how many of them will miss the mother and two daughters who perished in the fire.

"One of the most important things we can do is say a prayer for this family and remember them in your thoughts," said Winlock Miller Elementary School Principal Boyd Calder, who spoke to the crowd after an invocation from Pastor Terry Sundberg of the Christian Fellowship of Winlock.

According to Calder, he said two survivors of the fire, a pair of young boys who had escaped with their father after the blaze started at around 2:30 a.m., were students at his school, and he told residents at the vigil, if they take anything away from the tragedy the community has experienced, they should all try to be kinder and more patient with the children in their lives.

"As we go away from this tonight, I hope that we'll be a litter more tolerant of the kids that, maybe, are a little obnoxious now and again, or try our patience," he said. "Take your time to put your arm around them and love them because, man, they are the most precious things in this world, the most important resource that we have."

After Calder, a number of community members spoke about the need for parents to express love to their children, and the importance of depending on faith during these times, while neighbors, relatives and friends of the victims said they felt very comforted to see their community offering so much support.

One such friend was resident Connie Sneed, who said, having gotten to know the mother well since their family moved to Winlock last year, she felt the mother would have appreciated seeing how the community rallied together.

Sneed said, after moving to Winlock, the mother had been inspired to help unite residents toward improving the city, with Sneed noting Winlock had done just that, though through the death of her friend.

As songs were sung and prayers offered, residents began to place their candles around the base of the giant egg in remembrance of the victims, with stuffed animals and an American flag also placed as symbols of the community's affection.

Having first posted the idea for a vigil on Facebook, resident Brandon Patching said he was very grateful for the turnout the community had shown, stating it was their desire to run with the idea that made it a success.

"The community deserves the credit, to be honest," he said, stating such a turnout from the local residents is the reason he is dedicated to raising his family in Winlock.

During the evening, Patching and others were helping collect donations for the survivors, as their possessions had all been lost in the fire, and were accepting pieces of furniture, clothing, books, toys and other personal items for the families, while such donations may continue to be offered at the Winock branch of Umpqua Bank or the Christian Fellowship of Winlock.

An account at Umpqua Bank has also been set up by Sneed to benefit the family, and donations can be accepted at any Umpqua branch.

When reflecting on the totality of how his community had responded, Mayor Lonnie Dowell said such support and solidarity is the reason he returned to live in Winlock after retiring from the Navy, and said he feels very fortunate to be leading such a city.

"I feel honored and proud," he said, "to be mayor of a community that pulls itself together and helps each other heal." 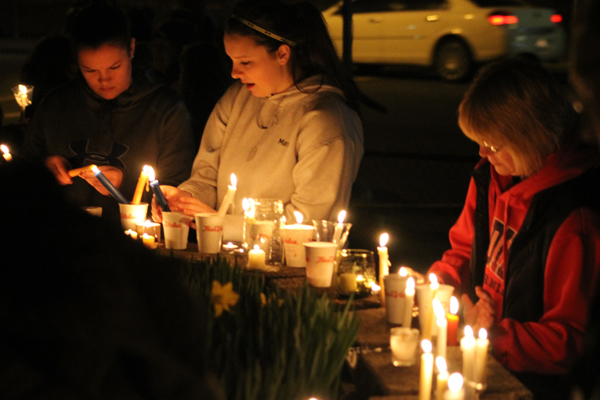 Residents leave their candles around the base of the World's largest Egg, which had normally signified celebration for the city but that night helped residents express grief and remembrance. 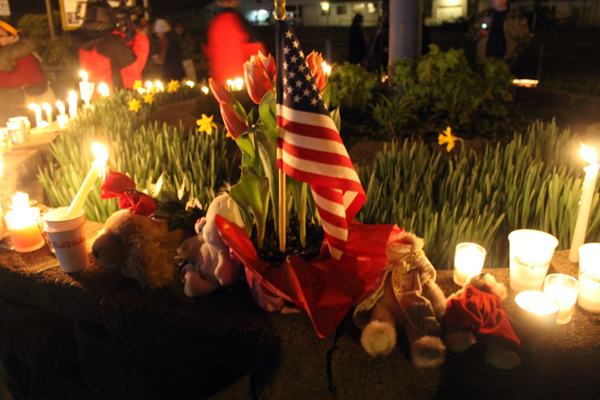 An American flag and a number of stuffed animals were left among the candles to commemorate the victims.