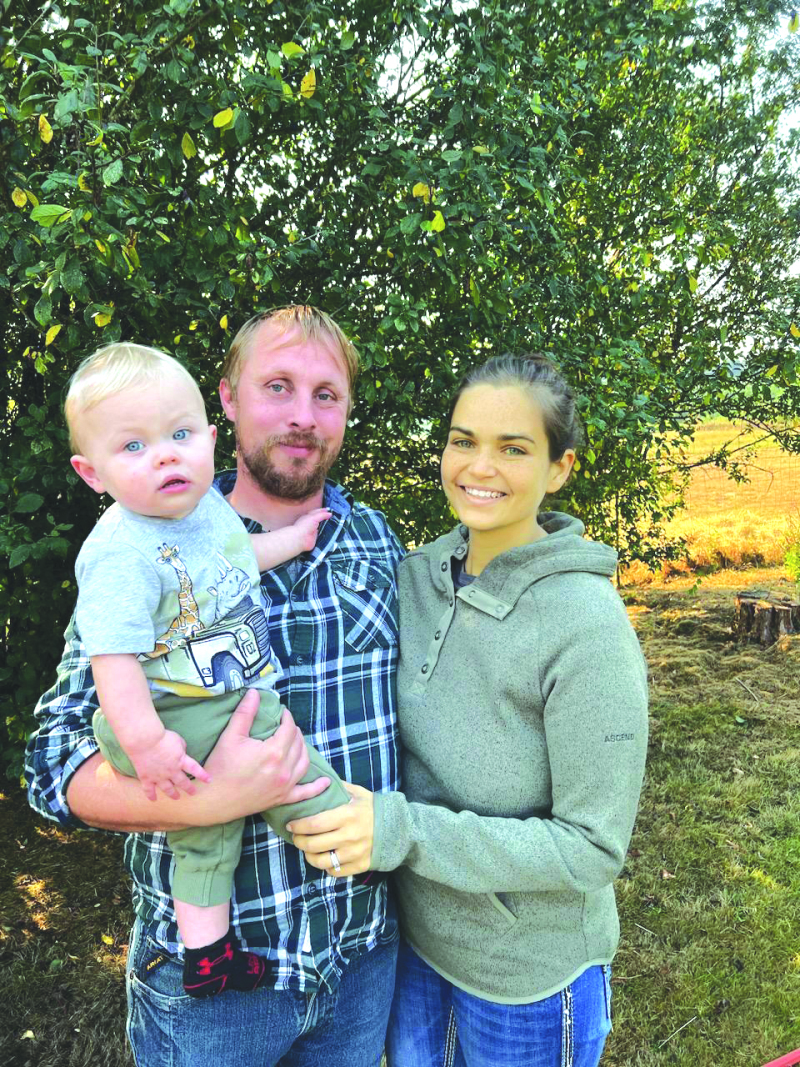 South Lewis County has always helped those in need in our area, this time it is a family who has helped others when they are in need. Justin and Holly Terry are a young couple with a 15-month-old son, Lukas. Holly is a young mom, she has her fears and concerns about having a liver transplant but we know the community will be behind her all the way.

In May of 2021, Holly was diagnosed with ICP or Cholestasis of Pregnancy, which meant she would have to deliver Lukas early on July 15, 2021. She had a few good months after delivery, but then she started to itch and her skin color was changing to the orange color of jaundice. What this means is that a couple months after delivering Lukas, she would need a liver transplant. She is now in Phase 2 of liver failure.

Talking to Justin and Holly makes you realize how much can happen in such a short time. She was healthy one day and before long this sweet young lady was told she would have to undergo a major surgery.

Holly stated, "Initially when I found out about my diagnosis while pregnant, I was scared. I actually know someone who had gone through it as well, so talking to them had eased my mind a little. The doctors I work with were also heavily involved in my care and I knew they would make sure nothing happened to me or Lukas."

Delivering Lukas early came with a whole different set of concerns. Holly continued, "Obviously with any early delivery the biggest concern is that his lungs wouldn't be fully developed, causing a stay in the PACU. When Lukas was born, he was only 5 pounds and almost didn't pass the car seat test, which also would have meant Lukas staying longer in the hospital. We were very lucky everything ended up being fine and he got to go home with us."

They didn't initially talk about a transplant according to Holly. "A transplant was not the initial course of action," she said. "They put me on medication to try and lower my liver levels. After they tried steroids with no change my GI doctor decided it was time to set me up with UW Liver for a future transplant. After UW did more workups and tried more medications with no change, they then decided the best course of action would be to move forward with the transplant."

Her husband, Justin, supported Holly through this time. "My first thought when we figured out holly needed a transplant, was a bit of fear and at the same time relief in that we now knew what was needed and had a plan for getting holly back to health and happiness," Justin said. Having a supporting husband and family during a serious illness is key, Justin has been instrumental in helping his wife.

They started a family but did not know if they could continue to have children, Holly continued, "At first, I was told I would never be able to carry another baby. Just recently my liver doctor said that one year after transplant, if all my levels look good then there is a possibility of having another baby."

Before and during the transplant they will have a lot of expenses, especially since all her appointments will be in Seattle. Parking, food, hotels, medications all add up. Holly stated, "I will have appointments twice a week in Seattle so gas will definitely be an added expense."

Holly has one main concern, not surviving the surgery to see Lukas grow up. She continued, "My main concern is obviously not making it out of surgery. That haunts my thoughts daily because I'm not ready to leave my family. Afterwards, the healing is also a concern. What if my body rejects the new liver? What if I don't heal well? I have a lot of fears going into this but I have to do it and I just pray everything will turn out fine."

Justin is also concerned for his wife, but he knows he has to be strong for Holly, he continued, "I was worried about losing my wife, my best friend and mother of my child, but I quickly moved past those thoughts. As I needed to be optimistic and brave for my wife, son and myself. All I can do during this process is be loving, supportive and when needed, a bit stubborn. To be that solid rock husband and father, my wife and son need."

Holly has been blessed with donors, she stated, "My step-dad and best friend have said from the start of this that if we decided to go with a living donor option then they would both get tested to see if they were a match. So far they have both gone through initial bloodwork and now they both have appointments at UW to get a complete workup done to see if they are a compatible match. I feel very lucky and grateful to have such selfless people in my life to even consider doing this for me. Surgery is always a risk, so I ask that any prayers and well wishes that are sent my way are also sent their way as well." Holly is always thinking of others.

She does not want anyone to worry about her, she stated, "The biggest thing I want for my family is for them to not worry or stress about anything, especially my husband. I know it's going to be hard on him having to take care of our son, the house chores, working, and now also making sure that I'm being taken care of."

Holly will not be able to work, she stated, "They are expecting me to be out of work 3-6 months. It could always be longer if complications arise or if healing is going slow."

Justin must also be off work to support his wife during this time. He stated, "I plan on being out of work for at least 3 weeks depending on Holly's recovery but more time could definitely be a possibility." Being out of work and extra expenses means this young couple is going to need the help of the community. They have a go fund me page setup and the name is "Holly Terry's Liver Transplant Medical Expenses" If you are unable to donate online, you can call or text Justin Terry at 360-324-8312.

When you sit and talk to this young couple, you will see they are just wonderful people. They just want to live a quiet life with their son and hopefully will be able to give Lukas a sibling. Please consider donating to their expenses so they have one less thing to worry about.