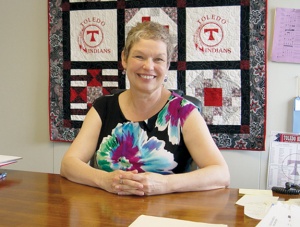 This last Sunday, Toledo School District Superintendent Sharon Bower was given her last dose of chemotherapy to treat a case of breast cancer identified in February of 2012.

In addition to 14 months of chemo, she has undergone 36 doses of radiation therapy and three lumpectomies to treat a form of breast cancer doctors were not able to precisely identify, but were able to tell was very aggressive.

Of the grades used to measure potential cancer growth, Bower's cancer, though it was caught very early, was given a "three-plus," the highest rating on the scale.

"And my surgeon, who is in her 60s--and so she's done this for a long time--said to me, 'I I can count on one hand how many times I've gotten a three-plus report,'" said Bower, who was assured the cancer could have spread elsewhere if she had waited to have her regular mammogram. "Lots of people have gone through all kinds of cancers and journeys harder than mine. But I'm public about it because mammograms saved my life."

According to Susan G. Komen for the Cure's web site, it is generally held that women should receive yearly mammograms by age 40, and those with high risk factors such as family history or a genetic predisposition should begin regular screenings as young as 25, or younger depending on the advice of a physician.

In addition to cancerous growths, mammograms can detect calcifications, cysts and fibroadenomas, which are benign but may indicate a higher risk of cancer in the future.

Bower said her earlier mammograms had indicated calcifications, but that her recent diagnosis was her first positive cancer result as part of a family that does not have a breast cancer history.

"A high percentage of breast cancer is the first in a family," said Bower, who said she has learned a great deal about changing perceptions of the disease while being treated at Seattle Cancer Care Alliance.

Once treatment began, Bower was met with the typical side effects of chemotherapy, including hair loss, nausea and decreased immune response. She largely credited the book The Cancer Fighting Kitchen, by Mat Edelson and Rebecca Katz, with allowing relief from such symptoms by providing a symptom-specific list of dishes to prepare to counter chemo's ill effects.

"Food became part of my treatment," she said, stating her attitude was to proactively combat the therapy through healthy living and a strong support system. "I just had this mission that I was going to get through it in the best, positive way."

Now that the main leg of her ordeal has come to a close, with her last mammogram showing no signs of cancer in her body, Bower said it has become her goal to encourage regular, thorough mammograms for the women around her, stating they should not be hesitant about what the screening may cost, or what it may find.

"If you care about yourself, or if you care about somebody you love, you need to make sure mammograms are current," she said, "If I had had my mammogram six months later, I was assured that this cancer would be in my lymph system. And if I had gone a whole year and missed, it probably would have been in multiple organs."

For those unsure of where to find local mammogram services, the radiology clinic at Providence Centralia Hospital is able to provide screenings. And if you are unsure if you can afford a mammogram, financial assistance may be available from Susan G. Komen For the Cure, through the State of Washington and Peace Health Southwest Medical Center, by calling 1-800-992-1817.