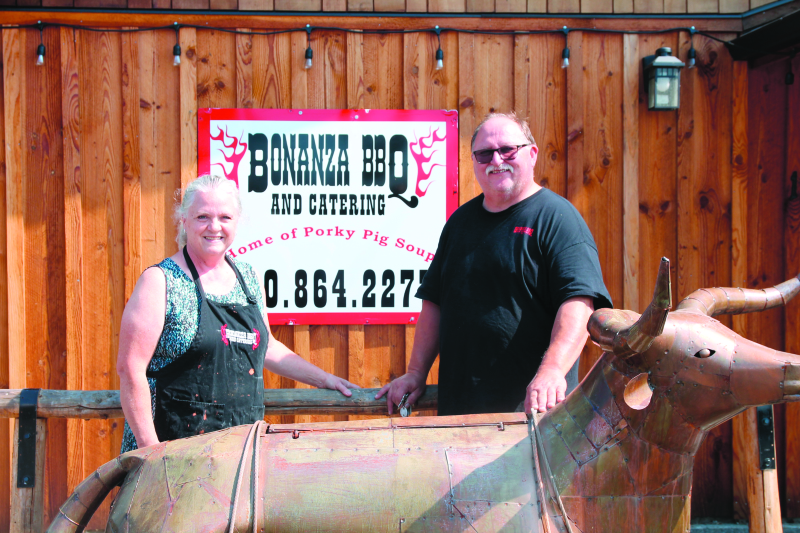 When we think of barbeque, we think of good ole' southern barbeque. Now, when you hear about barbeque in the area, you immediately think of Bonanza BBQ in Toledo, the place with the pig smoker in the front. Dan and Chris Gorton opened their first barbeque restaurant/catering business in 2015 and have been growing ever since.

Bonanza BBQ originally started in February of 2015 in Chehalis. "We started with catering and a small restaurant, but before long it became too small and we outgrew it quickly," stated Gorton. "We moved to Toledo in 2014 and in August of 2017 we signed the lease on the building." Little did they know they would blossom. "We were going to play around with the barbeque, but soon discovered Lewis County loves barbeque and the community of Toledo needed a caterer,' stated Gorton.

When asked why they decided to open a restaurant in Toledo, Gorton stated, "It's our little Mayberry." Bonanza BBQ offers catering as well as sits down meals on Friday and Saturday evening. They currently cater for several businesses in the area; they offer everything from breakfast, meat and fruit trays, barbeque and everything in-between.

They also rent out their facility as an events center. "You can rent the events center with or without food but it's usually easier if we do the catering. Our events center seats 75 which are great for a rehearsal dinner, business meetings or even a baby shower. We even did a 90th birthday party," stated Gorton. When you walk into the restaurant area, you know that this would be a fun place for an event since the location has recently been renovated. It's got that classic barbeque feel to it.

Bonanza BBQ isn't all barbeque they offer baked goods as well. "I am also known for my homemade carrot cake, cornbread and apple crisp," continued Gorton.
For those who wish to have an event at their home, Gorton states, "we can also do offsite event catering. We have all the equipment needed to make your event a success."

Next time you are looking for a place to eat on Friday or Saturday evening, check out Bonanza BBQ in Toledo next to the Post office. They are open from 4:00 p.m. to 8:00 p.m.; you can order off the menu or go through the buffet. No matter what your choice is, there is no doubt you will enjoy your meal.