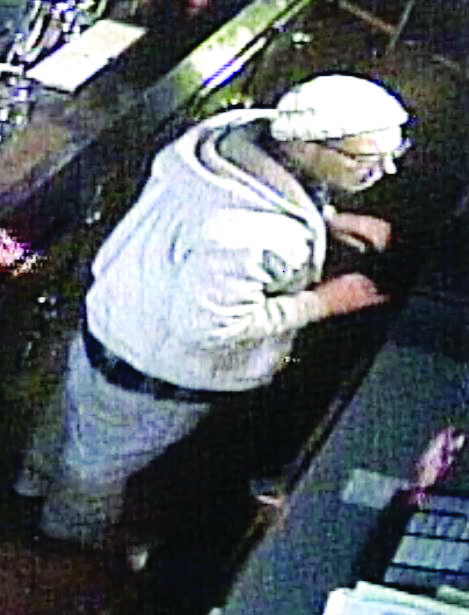 Photo from video surveillance tape. He attempted to disable video system but ion the end was caught. Tape showed his activities for approximately 6 hours.

On Tuesday, July 7, at 9:15 am, Hoquiam officers were dispatched to Trio's Bar and Grill in the 700 block of Simpson Avenue for a reported burglary that had occurred overnight.

In reviewing the surveillance system, the owner of the establishment found approximately 6.5 hours of video of the suspect not only entering the premises, but also silencing the alarm, rummaging the cash registers and attempting to pry open the safe.

It appeared the suspect may have attempted to disable what he thought was the video surveillance system; however, the electronic units and monitors he unplugged were actually just part of the bar's video karaoke system.

The suspect damaged the safe by prying on it, but was not able to make entry or dislodge the safe from the floor.

The suspect lingered inside the closed business until he was confronted by the cleaning person in the morning. He only managed to take a few small items and it appeared he did not even drink any liquor.

Surveillance photos of the suspect were subsequently posted on social media by the establishment in order the generate leads.

However, officers and detectives reviewed the photos and identified the suspect based on his appearance in the surveillance video. With 6.5 hours, there was plenty of video to view.

Hoquiam officers were familiar with the suspect, a 38-year old Aberdeen man, from prior law enforcement contacts; the suspect had recently been released from the Hoquiam City Jail for violation of a domestic violence no-contact order.