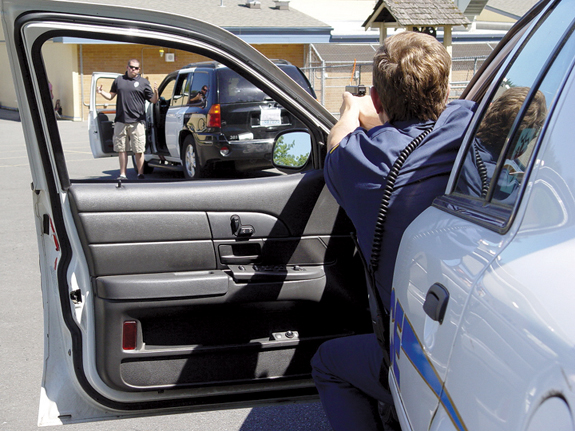 Cadet Shawn Hall (foreground), of the Lewis County Sheriff’s Office, commands volunteer Mike Ellis (background), of the Napavine Police Department, to exit a vehicle suspected of being stolen during mock scenes at Winlock Miller Elementary School Saturday in preparation for the final tests of the 2013 Police Reserve Academy in Winlock.

Cadets with the 2013 Police Reserve Academy in Winlock have passed a major hurdle after being evaluated during mock scenes on Sunday, a portion of state testing said to be the most difficult to pass.

Cadets spent Saturday preparing for the test at Winlock Miller Elementary School by going through five different scenarios exercising many of the conflict analysis and resolution skills they have honed throughout the last four months.

First was a crisis response scenario where a suspicious person with mental health problems had been reported and cadets were tasked with assessing their need for help or incarceration. Then there was a high-risk stop involving reportedly violent suspects, during which cadets risked being “killed” if they did not respond properly. Another traffic stop brought them against a subject who was verbally abusive rather than physically violent and mostly upset over getting a traffic ticket. Also testing their ability to ascertain a suspicious individual was a call about alleged indecent exposure with no available witnesses and no apparent signs of wrongdoing. Lastly, and arguable the most challenging part of the test, was a simulated building search, in which cadets responded to alarms at the school’s library and searched for a pair of suspects.

While debriefing on Saturday, it was said the cadets did generally well and had clearly absorbed their curriculum, but problems such as radio etiquette and protocol were a consistent challenge, as far as how and when to communicate information with Dispatch.

Lewis County Sheriff’s Sgt. Ross McDowell, who had helped evaluate the building search exercise, was among those who cautioned cadets to check in with Dispatch at the appointed times, because not doing so will cause alarm and possibly generate a massive police response to the officer’s last known location.

McDowell also noted cadets still seemed shy about searching female suspects who may have weapons or contraband hidden in private areas, stating cadets should now be “bashful” as these suspects may not be hesitant to cause bodily harm to officers or others in the area.

Cadets were able to practice all scenarios at least once and were able to pass on Sunday. Their graduation ceremony is scheduled to take place Friday at 7:30 p.m. at the Elementary School Gym and all are welcome to attend. 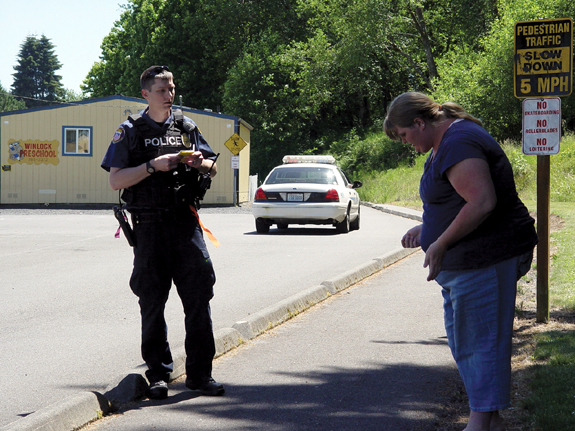 Jason Fiman (left), of the Tenino Police Department, attempts to evaluate the mental stability of volunteer Sharri Spredbarough, who stated she was awaiting the arrival of an alien space ship to take her back home. 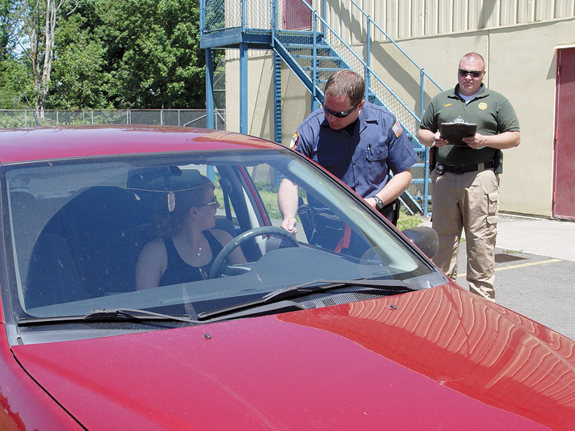 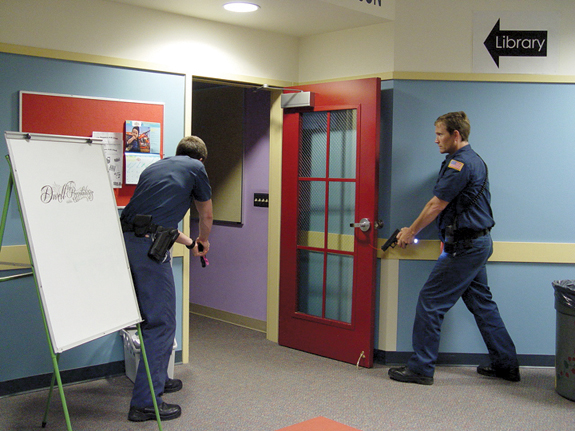 Lee Barker (left), of the Morton Police Department, and Hall prepare to search the Elementary School library for a pair of alleged suspects. 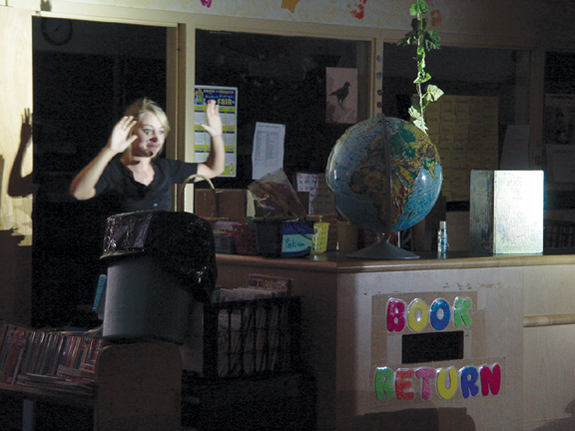 Volunteer Destiny Chesnut, an explorer with the Lewis County Sheriff’s Office, is discovered hiding in the book return and ordered to stand up.