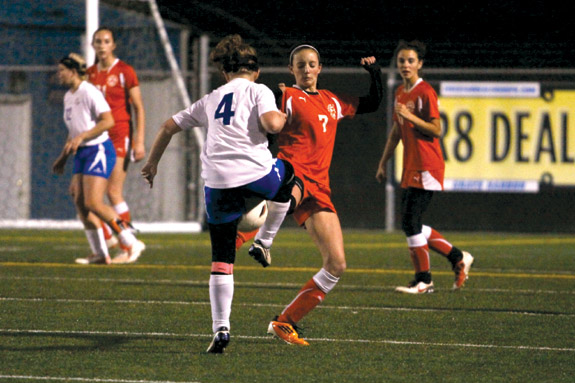 Castle Rock's Haley Holborn battles with Elma's Hannah Heelan for possession of the ball during a District IV soccer playoff game at Stewart Field in Aberdeen on Nov. 5.

team had their season come to an end Nov. 5 in the first round of the District IV playoffs with a 4-1 loss to Elma at Stewart Field in Aberdeen. The loss has been tempered as Elma went on to beat the formally undefeated and Trico League champion Woodland Beavers on Thursday night and then avenged their only two losses of the season by taking down Rochester. To advance to the state tournament.

Speedster Mikayla Risner scored the only Rocket goal in the final three minutes as she fooled a defender and embarrassed the goalie with her walk-in goal.

It was one of the few moments when the CR forward moved the ball unfettered within 30 yards of the net.

"They did a very good job of just high pressure," said CR head coach Brian Ziese. "Every time we touched the ball, they were on us. That is something that I am going to have to work on with these girls."

The trip to the playoffs was a significant turnaround from the last two years for Castle Rock soccer. The team had four of their seven losses in the first half of the season. During the second half, the Rockets beat La Center and King's Way Christian while only losing to eventual league champion Woodland and second place White Salmon. The Rockets completed the season 10-7.

"I think they improved as a team once they leaned what I wanted," said Ziese. "That took a while as they adjusted to me being the new coach. That went on for the first five games and then they started playing better."

"Every coach is different," continued Ziese. "We had eight seniors so trying to get them to learn the system so it isn't easy."

Ziese is well known in area coaching circles and has the Rochester boys as a perennial soccer power during the spring season. Perhaps Castle Rock soccer is just seeing the front end of that success this fall.