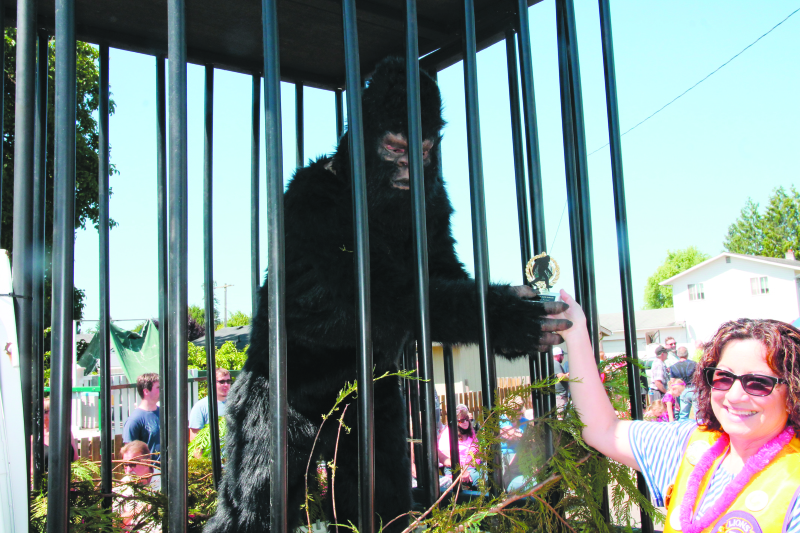 Cheese Days 2018 was a smash hit, many people in town to see the parade, car show, see the different vendors, walk about the retail store and more importantly Bigfoot was captured for the big parade.

This year was a special year, Bigfoot made an appearance. I spoke with Jim Wallace before the parade and he stated, "we had to go to the Hoopa Valley Indian reservation to catch him; we had to get permits from the tribe to hunt Bigfoot." Once we caught him, we had to get State and Federal permits to bring him up to Toledo. Right before the parade, he escaped and fortunately, we found him and put him in his cage for everyone to see and enjoy. You could tell without a doubt, he was the same Bigfoot that Ray Wallace had filmed in the wild. We will be taking him back to the Hoopa Indian Reservation to enhance breeding since they are such a rare breed."

Sam Zion also had Bigfoot on the back of his tractor, which was a sight to be seen and Ma and Pa Bigfoot were also in the parade as well.

The parade went off without a hitch, they had floats by the dozen and the best part is seeing the police lead the parade with the honor guard, it's always one of my favorite part. The Big Cheeses, The Pratt's and Borte's were in their convertibles or was it the Borte's and Pratt's. Toledo Fire Department, school football team, cheerleaders, youth cheerleaders and band were all in the parade as well.

After the parade, it was time to shop, eat and look at beautiful classic cars. Morgan Arts center was hopping with a class reunion. There was so much to see and do at Cheese days; I don't think there was a quiet time for anyone all day.

Finally, to close off the evening, Donna's Place has a fabulous country western entertainer's show. We were there enjoying the great lineup of country music while enjoying her delicious pulled pork sandwiches or cheeseburgers and drinks. Even though Cheese Day's is a very long day for the Town Crier, there is absolutely no way would we even consider missing it!

Thank you for welcoming everyone to Cheese Days and I appreciated all the compliments we received for putting out your first even Cheese Days edition.