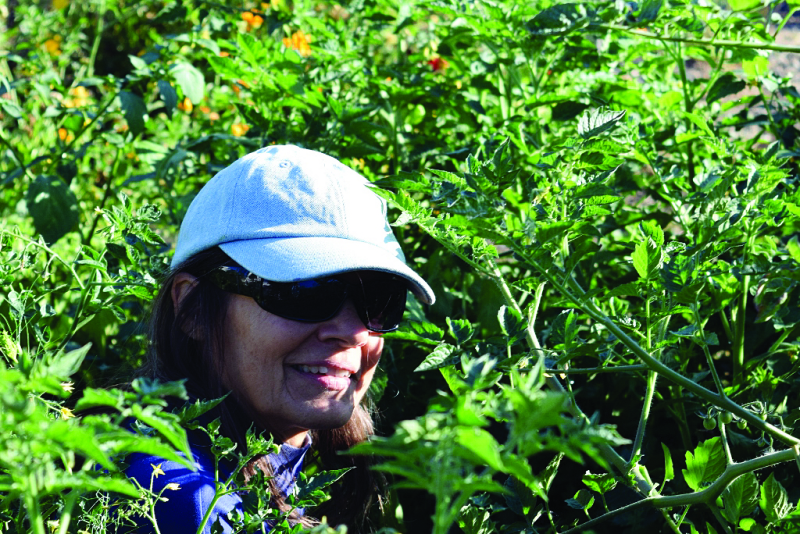 Photo by Vivian Edersheim - Growing Together Community Garden Manager Harvest McCampbell, enjoying the peace in the midst of the plants.

These are just a few of the things available in the common area at Growing Together Community Garden in South Bend. The nine households or organizations that rent garden space can share fresh herbs and berries as well as rhubarb and potatoes grown right there.

Sharing is nothing new for the community garden. In fact, it's the foundation of its mission. Sharing space, sharing expertise, sharing the harvest.

It's no wonder Harvest McCampbell, the garden's coordinator, decided to move to this area. A longtime gardener and garden blogger, Harvest - yes, that's her given name - "shopped" community gardens when looking for a new home.

"I first moved to the area in March 2014, and was attracted to the area, in part because of the garden," Harvest said. "I was an active garden member last year, and became the coordinator this year."

Public transportation was another important draw to this area and it's no surprise that through her travels to and from the garden by transit buses, she has sown seeds of gardening with some fellow travelers. One bed is currently rented by a bus passenger who learned about the garden in this way.

New growth within the organization became necessary this year as some longtime members have moved on to other areas or other pursuits. Two key members were Gary and Pastor Laurie Johnson of First Lutheran Church who moved to New Jersey last spring to help family members with health issues. Adam Ziegler and Melissa Johansen were another key couple in maintaining the garden over the years.

"The community garden was the result of going to a number of different community meetings, like the Willapa Community Network (and) the Providers Network.

They were saying there was a need for affordable fresh food."

By then the church had purchased the property where Legacy Food Bank is now located. The name - Legacy Food Bank - commemorates the financial legacy from Our Saviors Lutheran Church where Pastor Laurie also ministered before the church closed. The parishioners voted to use the funds in this way.

The space now used for garden beds was a grass-covered lawn Gary mowed. Pastor Laurie approached the church about using the yard space for garden space - and the idea took off. After the garden was put in place, Gary Johnson managed the bed for the food bank, among other garden duties.

"We started preparing for the garden in December 2011," Pastor Laurie said. "That June 4 we had our open house. We identified 67 individuals, businesses and community organizations that had been a part of getting that off the ground."

"Our garden is unique, in that we have an area that is dedicated to the local food bank and all the produce from that area goes to them," Harvest said. "We have areas that are shared among garden members planted in potatoes, a variety of berries, rhubarb, and fresh herbs, as well as leased plots were the members can grow what they like for their own households."

Anybody can rent space, Harvest said; the charge of $20 a year for a bed covers the water bill.

"Participating in the community garden not only provides gardening opportunities for people who don't have a yard, it is a great way to learn to garden for the first time," Harvest added.

Since the community garden grows produce for the food bank, "we encourage members and nonmembers to volunteer on Wednesday mornings, when they can, to help with the food bank donations.

"Volunteering at the garden is another great way to learn about gardening," she added. "We have lots of fresh herbs in the garden, and in most seasons we have enough to share with volunteers. Sometimes we even have extra produce they can take home as well."

When plants are divided, those can be shared, too.

Harvest's personal interest in gardening is her legacy from a long line of gardeners. Her name, Harvest, is the female version of Harvester, names used in her diverse, multi-ethnic family.

There's still time to plant for fall. Anyone interested in a garden plot, volunteering or otherwise supporting the Growing Together Community Garden should contact Harvest at (360) 934-5792.