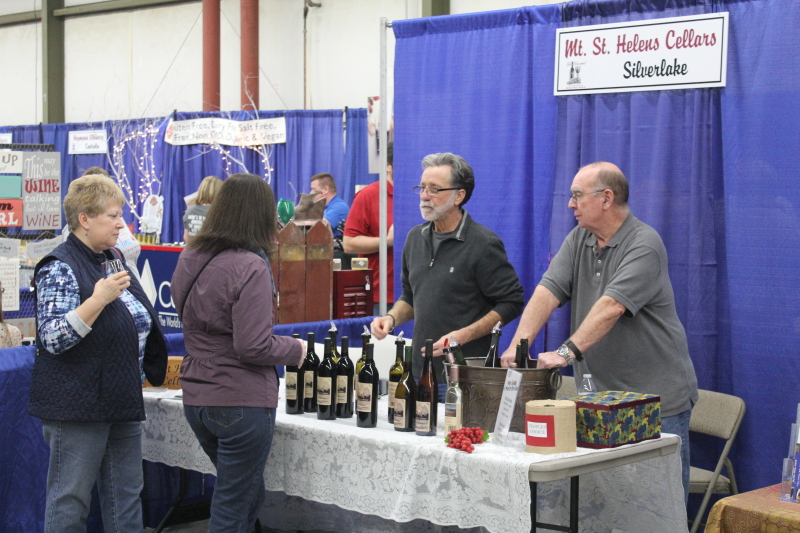 The Elma Chamber of Commerce has held their 9th Winter Wine Festival. The festival was held at the Grays Harbor County Fairgrounds and Event Center in Elma on the weekend of Saturday, January 23 and yielded a huge success. Live performance lounge acts crooned the crowds as vast lines of people moved along the perimeter of the building where the wine vendors lined the walls. The wine vendors dished up samples of all types of their best wines and consumers and connoisseurs lined up to try each wine of their interest.

Elma Chamber of Commerce Director Debbie Adolphsen commented on the festival, "We had a really close to record year," said Adolphsen, she explained that in just about every category, sales and attendance, the 9th Annual Winter Wine Festival was up in numbers from past events. "We had just over 1700 people, and across the board we were up on everything. So food, beer, wine, merchandise everything we had by the end of the night was tapped out. Lots of the wineries sold out," said Adolphsen. There were 18 total wineries as well as 25 food and craft vendors to choose from, with items such as Ila's food products as well as other crafts. Adolphsen talked of past record breaking festivals, "We had a record when we first started because at the time the festival was free attendance, and so that was a massive record amount of people; but interestingly we did not sell as much," said Adolphsen. She went on to explain that once the Chamber Board had decided to run the festival as a "21 and over" event in 2012, they had record wine sales. "We had only sold 100 presale tickets to the 2012 Winter Wine Festival, yet so many walk-ins came that our sales went through the roof. Financially, the 2016 Winter Wine Festival could have been an even bigger record than the 2012 festival," said Adolphsen.