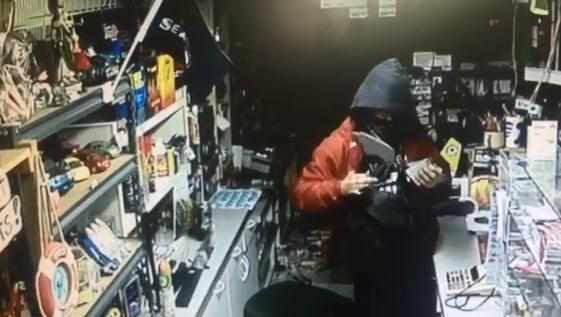 Surveillance video captured the crime and helped to identify the man in the hood and mask. The transient was found packing up his tent and leaving town.

On July 18, at 5:29 am, Hoquiam officers were dispatched to a possible burglary at the Fairway Grocery in the 2500 block of Sumner Avenue.

The reporting party working at McDonald's across the street heard glass breaking and noticed a male inside the store.

Officers arrived in the area to learn the suspect was last observed walking away from the scene on Sumner Avenue. Officers checked the area and requested a canine respond for a track, but no canine teams were available.

The suspect was not located at that time.

Officers discovered a point of entry through a window on the east side of the store. The owner was called to the scene to assess the damage and review the video surveillance system. The suspect was captured on video entering the premises and taking several items- including cigarettes and lighters.

The suspect was wearing a blue bandana to conceal his face, but failed to cover several prominent and visible tattoos.

On July 22, Aberdeen officers located and detained the suspect, a 32-year old male Aberdeen transient, on an unrelated warrant. The suspect apparently had packed up his tent and was getting ready to leave town when intercepted by the Aberdeen officer.

The suspect not only matched the description of the burglar, but he was wearing a backpack containing a tool consistent with what was used to break into the Fairway Grocery. Detectives seized his personal belongings and will be applying for a search warrant to inspect the contents of all his bags for items stolen during the burglary.