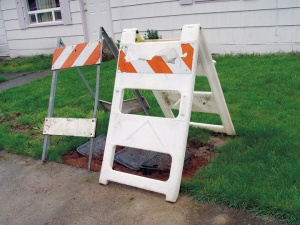 Uninstalled water meters at the center of a conflict in Winlock between City Hall and a pair of Longview-based property owners.

The City of Winlock may be facing a lawsuit from a pair of residential property owners if water meters on First St. are not installed differently.

Robert and Carlene Hayden, of Longview, spoke to members of the Winlock City Council during their March 11 meeting and said the current location of water meters on their property, at 803 First St., would require digging through their yard to connect to houses on Front. St, for which they said Winlock does not have an easement.

"If you do this without a legal easement—even though there may be one for the adjacent house—you’re going to see yourself in court," said Robert Hayden, who told city officials he does not believe he and his wife should be slighted because they are from out of town.

Winlock has been attempting to replace water lines under First St. since last year to fulfill the terms of a Transportation Improvement Board grant to repave the road between Rice St. and Alder St. When new meters were installed in November and December, many were left in unfilled holes apart from their original locations, which has been the source of the Haydens’ complaint against the city.

If meters were installed in their original locations, the Haydens argued, Winlock could use existing easements and rights-of-way to complete the project. Mayor Glen Cook said meter locations were changed so they could be grouped together to simplify meter reading, which Robert Hayden said was not a good-enough reason.

"Simplification is great, if you’re benefiting the city," he said. "Ain’t worth squat if you’re stepping on somebody else."

Carlene Hayden added the open holes were also a legal dilemma for the city, stating the hole around a group of three meters in their front yard was large enough for a pedestrian to seriously injure themselves.

"If somebody steps in it, they’re going to break a leg," said Carlene Hayden, stating she is concerned for public safety as well as her personal liability. "If somebody comes after me, I’m coming after Winlock, big time."

Carlene Hayden said she had filed a complaint Feb. 26 with City Hall before bringing the issues before the council, but had yet to hear back from Cook or any sewer/water representatives. After speaking her peace before the council, she said her desired solution would be to remove the new meters on her property entirely and fill in the holes, stating she will return to each council meeting until the issue is resolved.

Cook said he is limited in his ability to direct Public Works to correct the problem, stating $35,000 in funds donated last year for the First St. project were not intended to be used for labor, as has been clarified by representatives of the anonymous donor. The Haydens insisted whomever installed the meters on their property in the first place should return to remove them, which had been Lewis County Public Works employee Fred Terry.

Terry had been hired on a temporary basis during November and December to fill in while Winlock Public Works Superintendent Gregg Robinson was recovering from knee surgery, but has since expressed an unwillingness to continue his involvement because of politically-charged criticisms brought against him and his work during previous council meetings.

On Monday, Cook said he plans to follow up with City Attorney Mark Schiebmier before responding to the Haydens’ complaint, indicating he does not doubt their willingness to bring suit against the city.

He added Winlock plans to use only existing rights-of-way to complete the pipe replacement project and said the current location of the meters in question, which are presently unhooked, should not indicate their final installation point.