Hoquiam Pride even bigger this year 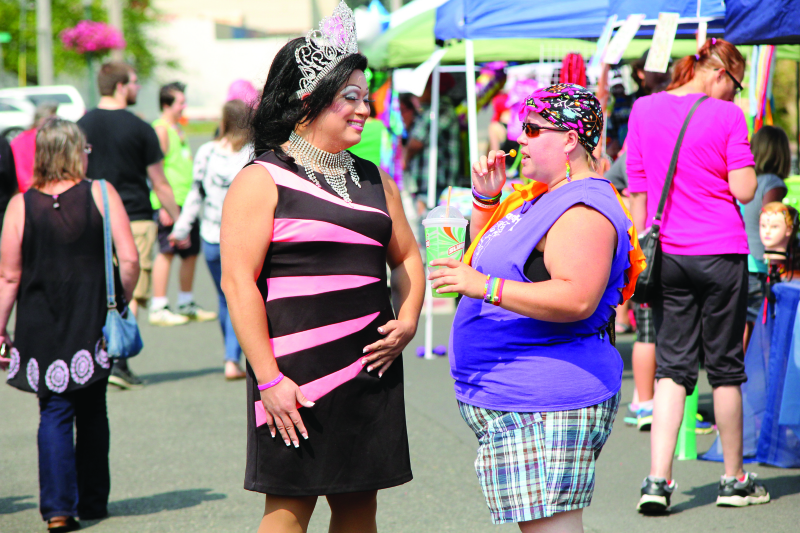 People were in and out for the duration of the festival. This year a larger number of vendors and those in attendance bring more attention to the Out and Proud community in Grays Harbor

The Second annual Grays Harbor Pride Festival was held on Saturday, August 22, with an attendance of about 1,700 people. This number is 700 more than the estimated attendance of last year's festival. Well over 300 people attended the Pride Drag and Rocky Horror Picture Show held at the Seventh Street Theatre.

Some of the reasons cited by Jen Gillies, the Out and Proud Grays Harbor Coalition President, as to why she thought this year's Pride Festival was even more of a success than the last, "It had a lot to do with the fact that we were established from last year's festival, and this year we had a lot of social media preparedness. There were so many people that didn't even know that it happened last year."

The Second Annual Pride Festival in Hoquiam was a huge success. The Pride Festival is a celebration that is family friendly, and welcomes all types of people. The Out and Proud Grays Harbor Coalition's vision is to "Create a community where everyone can live freely without fear of violence, where our identities, relationships and families are respected in creating a safe harbor for all people to express themselves free of judgment," states the mission of Out and Proud Grays Harbor.

The coalition has made it's presence in Grays Harbor known, and wants to advertise that they are available for anyone who is in need of help, that the coalition will help to advocate for them and educate others, and help them be themselves.

"It was a success!" said Gillies, "You hear so many stories throughout the festival about how it's nice to have an event where people can be proud of their sexuality and have people accept them for who they are."

Hoquiam Mayor Jack Durney and Police Chief Jeff Myers were in attendance, "They were after the famous Indian Tacos," said Gillies; Indian Tacos are a type of frybread dish that are known to be served at the Pride Festival. Current Aberdeen mayoral candidates Jack Micheau and Erick Larson also made an appearance to show support for their community, along with current Aberdeen Mayor Bill Simpson and other political candidates. Vendors filled the street, some of the politically active variant, and some were regular craft vendors, and the Grays Harbor Democrats had their hamburger booth set up and serving burgers to the community as well. There was a day of entertainment scheduled for music performances and lip-syncing alike. The bands that played were Coma Figura, Driftin' Harbour Rats, The Hot Cops, Dark Palms, Captain Tightship and Dogger. In between each musical performance, while the prior bands packed up, and the next band were setting up, lip syncing performances were put on by Ceasar Hart, Lexxxi and Mulan Rouge, (the 2013-2014 Miss Gay Washington).

If you have any questions for the Out and Proud Grays Harbor Coalition, you can go to the "Contact us" page at www.OPGHC.org.