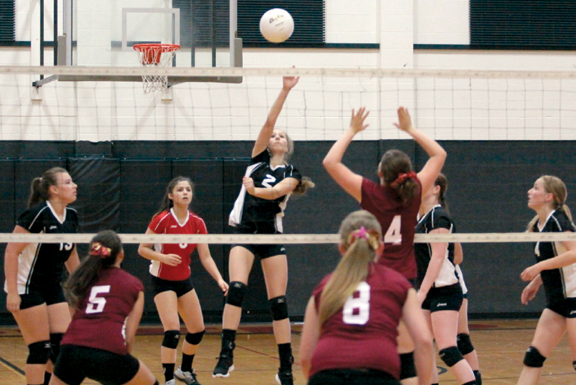 Toledo’s Jessica Kelly (center) executes one of 10 kills in a sweep of Winlock on Saturday afternoon.

At the end of the season, it may not mean much, but for now, it is a big step forward for first-year Toledo Head Volleyball Coach Whitney Luchau and her Lady Indian spikers. Toledo swept Winlock 25-15, 25-9 and 25-11 in a rare Saturday afternoon match-up that featured the two rival schools, normally in different leagues.

Game one started competitive but Toledo was able to pull away for the 10-point victory. In game two, the Lady Indians started putting the pieces together with excellent front line play. Jessica Kelly, Jenna Peterson and Beth Demery made life miserable for Winlock with kills and blocks.

Kelly in particular had 4 blocks and 10 kills during the match.

Luchau said she was impressed with her team's performance on Saturday.

"I am very proud," she said. "The team themselves worked very hard from the day I took the position until now."

The new coach is a graduate of R. A. Long in Longview and played volleyball and worked as an assistant at Lower Columbia College said that there is an expectation among the girls to succeed.

"The nice part about all of the girls is that they have that attitude where they want to win," explained the coach. "They worked hard. It is completely their attitude. They are a very mentally tough team."