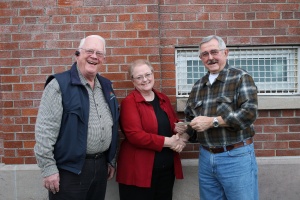 $1,000 winner Photo by George Kunke From left are Dick Woods, co-chair of the Willapa Lions Club Rain Derby, Sue Koons, the $1,000 winner, and Ralph Turner, President of the Lions.

Pacific County rain can be fun – especially if it wins you $1,000. That’s what it did for Sue Koons of Raymond, who was the winner of the Willapa Harbor Lions Club 2012 Rain Derby. Koons came within .01 of guessing the rainfall for Pacific County for 2012, which was 99.98 inches.

What’s Koons planning to do with the winnings? “Within 12 hours of finding out, I had to call Home Depot and order a new stove,” she said. “I had planned on some fun things.”

Koons said she’s “a good cook” and that here husband “is looking forward to” her cooking. “We still may take a little trip somewhere with the money that’s left over.”

Koons did not guess both the exact yearly rainfall and the exact December rainfall for the year or she would have came away with $5,000. December received 15.09 inches and Koons’ guess was .03 off the mark.

Including sponsors and ticket sales, net proceeds from the contest was $5,000.  The money generated from the $1 raffle tickets helps sustain scholarships, eyesight and hearing funds and community service projects.  In the past, the Willapa Harbor Lions Club has donated to West Coast Hearing, the Willapa Harbor Food Bank, HAVA, Case’s Pond, Habitat for Humanities and Washington Business Week to name a few.

“We’re always looking for new members and we’d like to get some younger members into our organization,” said Dick Woods, co-chair of the rain derby.

The Lions Club meets every Wednesday at 7 a.m. at the Barge Restaurant.