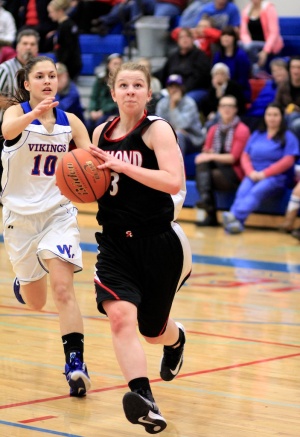 “We came out with a lot of intensity and really shot the ball well,” Tully told the Herald. “We did a nice job defensively of challenging every shot and not allowing too many good looks.

“On the offensive end, we moved the ball well and were able to knock down our open shots,” Tully said. “Darol Ratsavongsy led the way with 18 points and eight rebounds and Andrew Hamilton had a double-double with 10 points and 10 rebounds.”

“I love rivalry games,” Raymond head girls’ coach Jon Schray told the Herald. “The girls were really excited for this one. We watched quite a bit of film on them this season trying to make sure that we would be prepared for their skills. We were confident that they wouldn't be able to match up with us inside, so we fed Aiysha (Garcia, 16 pts, 10 rebs) the ball as much as possible and she really came through for us. The girls played great defense and rebounded well.

“Abby (Maneman) had another great game dropping 17 (points, 10 rebs) – nine coming from three three-pointers in the first half,” Schray noted.

“Raymond (10-1, 5-0) had a great first half...it seemed like every shot fell for them
and we couldn't buy a basket,” Valley head coach Melissa Aust told the Herald. “Garcia (6/10) and Maneman (7/10) both shot the ball very well that first half. In the second half, Raymond had cooled off, but we still couldn't get anything going offensively. We got the shots and good looks, just nothing would fall.”

“James Hamilton led the way in the scoring column with 11 points to go along with seven rebounds,” Tully said. “Darol Ratsavongsy and Alex Sida also gathered seven rebounds, while Marvin So led the steal parade with five.”

Visiting Hoquiam (9-1) turned in a strong second half to down Raymond 63-39 Dec. 29 at the Seagulls’ co-ed holiday tournament. It was the Gulls’ first loss of the season.

“We played with much more intensity than the previous night's loss to Montesano, but we just couldn't buy a basket,” Coach Tully told the Herald. “We finished the night shooting 20 percent from the field. You just can't beat a good team while shooting 20 percent. Hoquiam also did a nice job of working the ball into their big guy, Cole Smith, in the second half. We didn't do a good job of defending him and let him get too deep in the post. Hopefully, we can learn from this game and continue to improve.”

Raymond led 14-12 after one quarter and trailed 26-25 at halftime before the Grizzlies outscored the Seagulls 37-14 in the second half.

Montesano thwarted the host Seagulls 44-40 at its holiday tournament Dec. 28.

“We had a better start against Montesano, but we couldn't keep it going,” Coach Tully told the Herald. “After getting a seven-point lead early in the second quarter, we allowed Montesano to go on a run and eventually go up by 12 in the third quarter. We fought back to within two late in the fourth quarter, but we just couldn't put a shot down. We missed a number of point blank, open lay-ins and free throws.

“Montesano did a nice job of controlling the tempo and slowing our running game down,” Tully added. “Unfortunately, we weren't able to respond and get the tempo back where we needed it to be. Andrew Hamilton and Darol Ratsavongsy both finished with double-doubles,” Tully reported. “Andrew had 12 points and 14 rebounds, while Darol finished with 14 points and 10 rebounds.”

The Gulls led 11-10 after one quarter, trailed 20-19 at intermission and fell behind 35-25 heading into the final frame.

“We won, but it was like we were stuck in second gear all night,” Valley head coach John Peterson told the Herald. “We played good defense through three quarters, holding them to 22 points. We then gave up 24 points in the fourth quarter and that is just unacceptable. Pe Ell, as
usual, played very hard and we felt good to hang on and get a win, but we
have to play better than we did in the fourth quarter.

“Matt was outstanding with 22 points,” Coach Peterson reported. “Stephen (Camenzind) had nine rebounds and Randy Heckard with seven points and seven boards played his best game of the year.”