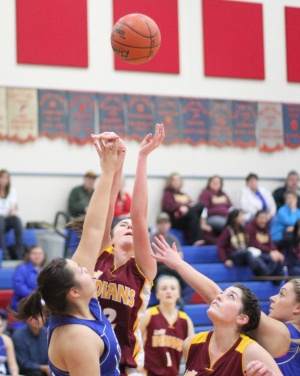 South Bend's Makenzie Russell goes up with a J against LaConner Friday afternoon at a tournament in Menlo.

Double-doubles by Raymond’s one, two punch of Abby Maneman and Aiysha Garcia catapulted the Lady Seagulls to a 49-42 win over Rainier Thursday at Seagull Gym.

Raymond, improved to 7-1 with the win, led 9-6 after a ragged first quarter and 23-18 at halftime. The Lady Gulls were in front 34-25 heading into the fourth quarter.

Maneman turned in another big game with 22 points during a 57-16 blowout of host Naselle Friday. The talented senior also took down seven rebounds and blocked four shots.

“The girls played a great game, and shot the ball well,” Raymond HS Head Girls’ Basketball Coach Jon Schray told the Herald. “Naselle is a tough place to play. We were in foul trouble in the first half and went deep in to the bench where our role players really played well. Abby had another great game shooting 75% from the three-point line leading us to the win.”

LaConner outscored Willapa Valley 13-3 in the fourth quarter to register a 48-38 win over the Lady Vikings at the Jack Q. Pearson Holiday Tournament Thursday night.

LaConner led 14-13 after the first eight minutes before the Vikes took a 25-20 halftime advantage. The game was tied at 35-35 heading into the fourth panel.

Northwest Christian held on to defeat Valley 43-39 on Saturday (Dec. 22) at Lacey.

“Ugh...we couldn't pull it out,” Willapa Valley head coach Melissa Aust told the Herald. “We didn't play that great, in our 2-3 defense. We made mistakes and just seemed to never be in position. We missed several open layins; at one time I think it was three in a row and we just can't do that if we want to win these games. Their height hurt us a little in the first half; as we didn't rebound that well, but we matched up man the second half and it didn't hurt us.

“The most frustrating thing about this loss is that we didn't play great and we were right in the game the whole time and then lose by four,” Aust said. “If we could just cut down our turnovers and play a full four quarters, that would be awesome.

“Northwest Christian had their biggest lead by nine points at 5:13 in second quarter, but we went on a 10-0 run the next eight minutes to tie it up then it stayed within one basket until 6:03 in fourth quarter,” Coach Aust reported. “We had the lead at 33-29 and we then only scored two points in the next three minutes, where
they scored 10. With 1:40 left in game, Northwest Christian led by two (39-37) and Lauren Friese reached across the end line and got a technical for touching the ball out of bounds as Northwest Christian tried to inbound it. Christian's Hailey Bredesen made both free throws and the Navigators retained possession and Bredesen scored again with :39 to play for a six-point lead.

“Brooke Harden and Sydney Wilkeson gave us some minutes off the bench tonight so that we could have a little bit of height against their tall girls,” Aust said.

The Tribe shot a miserable 14 percent from the field on 6 of 43 and committed 29 turnovers.

The Lady Indians of head coach Gary Wilson slipped to 4-5 on the season.

South Bend played LaConner in an afternoon game Saturday at the tournament. The Lady Indians visit Naselle today and Willapa Valley Friday. The Tribe hosts North Beach Monday (Dec. 7). The game was moved up from Jan. 24 and the game at North Beach was moved from Dec. 22 to Jan. 24.