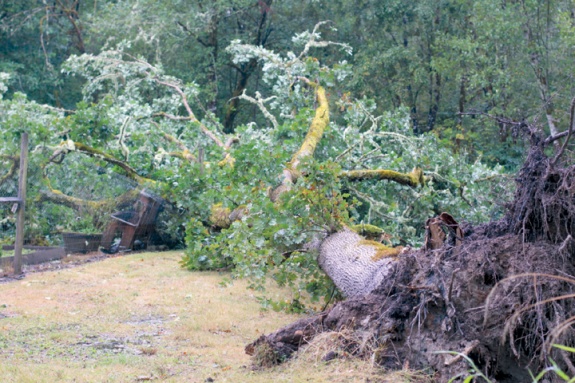 An old growth oak tree fell in the yard of Gayle and Terry Holmes in Toledo on Thursday night during the very wet thunderstorm.

Restless nights were the norm last week as thunder rumbled in the distance in the local area. On Thursday evening, that changed dramatically as a massive, memorable thunderstorm shocked Southwest Washington with unprecedented light, noise and rain.

"I was talking to the guys at PUD today and none of us had ever experienced a lightning storm of anywhere near that duration," said local resident and PUD worker Tommy Thompson. "Those in the discussion were all Lewis County natives. So I would have to say that last night's storm is a record-making event".

The storm began at about 5:30 p.m. and lasted until around 9:30 a.m. Power was knocked out in Winlock at about 6:30 p.m. but was back on by about 8:30 p.m. Longer outages were reported in the Napavine and Chehalis areas. Power was restored to all areas by about 4:00 a.m. Friday morning.

Observers in Winlock reported at least a dozen down strikes within a mile of Winlock proper.

The National Weather Service (NWS) reported 559 lightning strikes in the greater South Puget Sound area and a NWS cooperative observer in Winlock reported 4.19 inches of rain during the 14-hour period (5pm Thursday to 7am Friday). Wind was reported as a non-factor in the storm.

At the Holmes residence in Toledo, a change took place that hadn't happened in 21 years.

On Thursday, an old growth oak tree gave way under shifting weight and very moist soil, or possibly lightning. Lighting was in the area, but there was not apparent lightning damage to the tree. Terry Holmes reported what appeared to be chunks of coal or charcoal in the root wad.

"It was very loud and felt like it was right above us," said Holmes of the storm in Toledo.

The event had other residents talking about past local thunderstorms.

"We had one about 25 years ago...it didn't last this long and wasn't to this extreme," said long-time resident Debbie Davis. "Lightning hit our transformer (30 ft from our house) which blew out our well pump and washing machine."

"I have lived in Winlock my entire 57 years," said Carrie Pennington, an EMT with Lewis County Fire District 15. "We have had some good thunder and lightning storms in the past, but I don't ever remember a storm like this one. The most impressive lightning strike I saw was when it hit the chain link fence behind the fire station. It traveled down the entire fence, lighting it up."

"I've lived in the Winlock area pretty much all my life (53 years) and have never seen such a dramatic, LONG, thunderstorm," said Rosemarie Watkins. "My Uncle Wilbur Thompson who has lived in this area since 1936 told me that he hadn't seen anything like it since his early years in Nebraska,"

Stephen Brewer chimed in with his emphatic thoughts on the event: "In 72 years, that was the loudest, longest storm I have seen in the Pacific Northwest!"

The storm will probably be most remembered for the motorcyclist who was struck by lightning on Interstate 5 on the south side of Chehalis. Remarkably, the rider survived with minor burns, but a very disfigured helmet.