Mayor Candidates Discuss the Issues at the DNR Theater 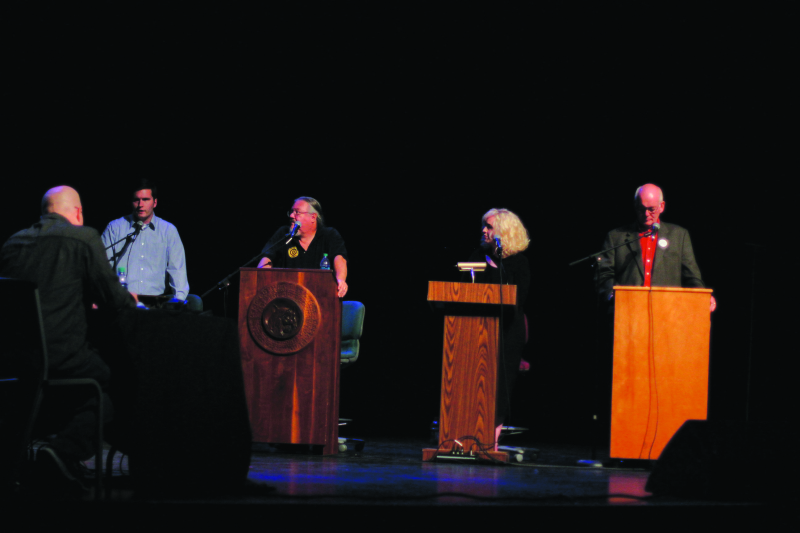 Photo by Pat Myers - The mayoral candidates for both Hoquiam and Aberdeen appeared on center stage at the DNR Theater last Thursday night to field questions that were presented by a board of commentators. From left to right are Aberdeen Mayoral Candidate

The D&R Theater opened last Thursday night to a crowd of about 200 while hosting the 2015 mayoral debate and forum. On the stage were 2 mayoral candidates for each Hoquiam and Aberdeen. Additionally, there were 3 local newsmen who ran the show as the acting commentators. The forum began promptly at 8:00 pm and ran for a little over 1½ hours. Running for the seat in Aberdeen were Jack Micheau and Erik Larson and for Hoquiam were Jasmine Dickhoff and incumbent Jack Durney.

In the first hour or so each of the candidates were asked questions and had 2 minutes to address them, their opponent would then have one minute to comment and/or rebut. In the last half hour the commentators opened the floor to engage in a panel discussion on general questions that involved both cities.

The first question was posed to Jack Micheau. "Mr. Micheau you have a reputation now and when you were on the council for stirring things up a bit and pointing out what's wrong. What can you say to convince us that you will lead from the front that will build coalitions that will fix some of the things that are wrong? Micheau's response, "Well, I think my track record actually speaks for itself; there are a lot of things that I have accomplished in 30 years of activism on the harbor, those of you that picked up the blue flyer on the way in on the back side is the experience portion. There is literally so much that I can't remember."

He went on to say that while on the council he chaired the finance committee, he led from start to finish the bond reallocation process and got 5 projects through that the city really needed. He added that he was involved in the hiring of the first museum curator and getting the museum remodeled, he was on the Defense Violence Board and the Seaport Board. This is to name just a few of the accomplishments that he cited.

The commentator asked Dickoff the following question, "Jasmine, it seems that Grays Harbor, in the last 3 decades, always takes one step forward and two steps back as far as the economy is concerned. What would you consider is the current base industry and is it different than what it should be?" Dickoff responded,

"In Hoquiam it would surely be the Hoquiam School Disctrict and the Grays Harbor Hospital. As far as what it should be I think that we really get in front of ourselves as far as economic development when we squabble about what kind of industry that we want to see as opposed to focusing our energies on harnessing good marketing skills to the community and providing the best possible community services and permitting processes that are clear and direct and easy to navigate. I don't have a strong opinion about what I believe should be the next strong industry. I do have strong opinions about economic and environmental responsibility but I think that we need to move on about just seeking out potential as opposed to having a specific thing and hoping that we catch that thing.

Erik Larson was asked, as a candidate who envisions a revitalized downtown Aberdeen with specialty stores and urban living, how would you suggest that the city clean up the downtown area, work on the homeless issues, as well as address safety concerns as well as address public and private property that influences the overall look and feel of our community? Larson's response: Well I think the biggest thing that we need to do is build investment in our downtown and create the storefronts in areas where the emphasis should be and also provide clean, accessible places for people to stay. Larson went on to say that the lane modifications in downtown has had a good affect and that the flower planters and building owner paintings have shown the people that Aberdeen is moving forward and that they should be a part of it. Larson also feels that the city should provide incentives to existing owners to rebuild or remodel.

Candidate Jack Durney was asked about the flood of last January and in retrospect would he, as mayor, have done anything differently. Durney's responded saying that the flood was an unimaginable event and thinking about the people on Beacon Hill who were stranded because there was 40 ft. of debris on the roadway which took 3 weeks to remove. Thankfully, he said, the city was able to put in an alternate roadway during that time. He added that flood insurance is an issue with the increase in cost. He says that he thinks that there will need to be a multi-jurisdictional master plan to address the future of floods in the cities. He predicts that the city will be dealing with higher water levels in the future which is going to require some major infrastructure improvements.