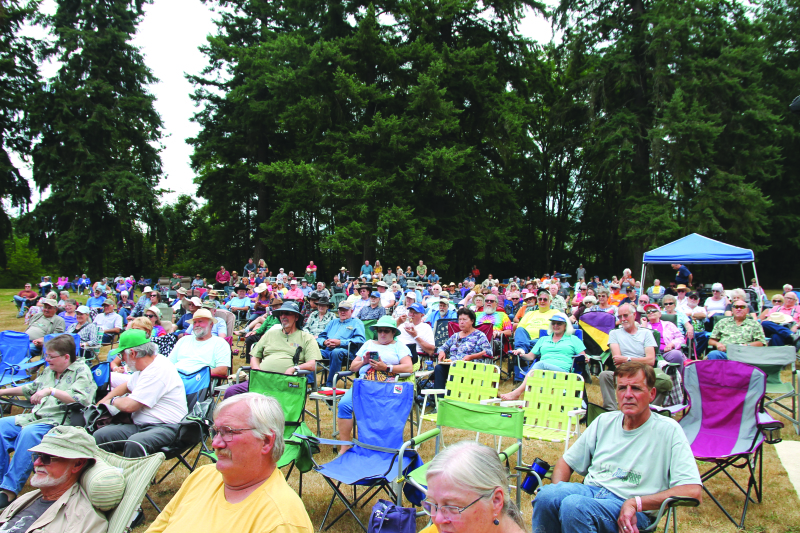 A crowd of attendees gathered during the music performances during the 2019 Bluegrass Festival in Toledo.

General Cothren, who has been organizing this event stated, "We have a great variety of bands who will entertain you throughout the weekend. It is a great time for all who attend." If you are a senior citizen and would like to purchase discounted tickets before the event, please contact General at 360-520-4524. Discounted tickets must be purchased before the event.

Here is the lineup for the weekend:

Annie Staninec & Whiskey Deaf
Whiskey Deaf plays a lively mix of lesser-known traditional bluegrass, old-time and early country tunes, and brings together a unique blend of styles and talents. They are all seasoned professionals, but most importantly they share a genuine joy playing this music with one another, and it comes through in every performance.

Annie Staninec is a uniquely gifted fiddle player, bringing driving rhythm, musicality and joyful exuberance to every performance. She has performed in over 20 countries with artists spanning from Peter Rowan to Rod Stewart, and is on countless recordings in a variety of musical styles.

Annie will be joined by her musical partner John Kael on banjo. John is a founding member of Whiskey Deaf, a multi-instrumentalist and award-winning songwriter, and has toured and taught internationally for over 20 years.

On vocals and guitar will be the powerhouse singer Jered Widman. An Oregon native, Jered was introduced to early country music at a young age by a musical family, and his voice has been showcased in numerous country and bluegrass bands for decades, including local favorites Great Northern Planes.
Playing mandolin and also singing lead and harmony vocals is Jeff Smith, who has been playing bluegrass on the west coast for over four decades.

Anchoring the bass is the rock-solid Dee Johnson, who has graced the stages of nearly every northwestern festival with numerous bands including Sunny South, Fern Hill, The Loafers, WIld Mountain Honey, and of course - Whiskey Deaf.

Dave Baker & Heart Wood
The HeartWood Bluegrass Band formed in 2000 around the powerful duet singing of Billy Moore and Dave Baker. Billy, while in his early 20s, learned to sing with Dave and they developed a close harmony style akin to brothers or a father-son duet. They perform many songs as a duet all the way through, when traditionally the song may have been solo or harmony on the chorus only. Little Davey Baker IV, who now towers over his father, has been performing on the bass since he was 12. Dave transferred his Monroe style mandolin playing over to flatpicking guitar which fit Billy's hard driving banjo style perfectly.

Jimmy Hall is the triple threat front man with Powell Mountain. Jimmy is quickly gaining a reputation as one of the finest flat pickers around. He is a fine lead singer and his natural tenor is a delight to hear. Jimmy started playing guitar at the age of 13 and has been deep into bluegrass for the last 10 years.

Robert Catlin was raised in Fairfield County, South Carolina. His grandfather A. Lundin, was a locally renowned fiddler in heavy demand at house parties, barn raisings and corn shucking. On many occasions, Bobby was allowed to attend these gatherings. His pap gave him his first banjo at the age of 7 which he learned to frail in the old mountain style.

Kelly Erb, fiddler in Powell Mountain, was born and raised in The Willamette Valley of Oregon and has played fiddle since the tender age of 6, first studying classical music before taking up bluegrass in her teens.

John Brogan grew up in Albuquerque, NM, playing violin in school orchestras. It was in college when he first heard Old and In The Way. Reading the liner notes, he discovered the likes of Bill Monroe, Flatt and Scruggs, and The Stanley Brothers and a love of traditional bluegrass music. He decided to learn the mandolin and sing that high-lonesome sound.

Steve Snider was born and raised in Memphis, TN, where he was exposed to and quickly learned to love bluegrass music. In his early days one could find Steve playing bluegrass guitar at the Lucy Opry and the Bluegrass Shack. Moving to Missouri, he spent many years playing hymns and worship tunes in various churches.