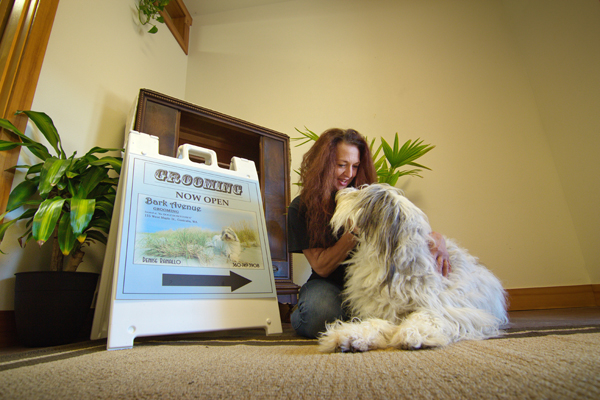 Multiple businesses in the local area are opening soon or under way, and Town Crier is pleased to highlight several of them in our New Business Showcase.

Winlock residents now have access to a dog-grooming shop downtown run by a businesswoman with more than 20 years experience in the industry.

Bark Avenue Grooming is currently open at 308 NE First St., with owner Denise Ranallo stating she has been looking forward to opening such a store since moving to the Winlock area last year.

"I've always had a love for animals, especially dogs," she said, stating she had operated similar shops while living in Minnesota.

Ranallo said Bark Avenue Grooming is available for traditional fur appointments, but is also able to cater to the owners of older dogs and those who may have behavioral issues. Ranallo said her approach is simply to take things slow with such animals and make sure they are comfortable during the grooming process.

"The dogs, they basically come first," she said.

To schedule an appointment with Bark Avenue Grooming, call Ranallo at (360) 749-3908, or visit their location in Downtown Winlock. They also have an open house planned for the weekend of Egg Days.

A project undertaken by volunteers from the Winlock-Vader Food Bank, Winlock-Vader Village will feature a thrift store and restaurant in Downtown Winlock.

Though slated to open June 1, organizer Chuck Sonner said, working around the availability of volunteers, the opening of the thrift store is instead expected by the end of this week, while the restaurant will be opening in time for Egg Days later this month.

Until that time, Sonner said workers will be pulling "a couple of all-nighters" to make sure the new business is ready, and said those hoping to volunteer still have the chance to do so.

"Anything we can do to help the community, that's what I'm looking at," said Sonner of the business model for Winlock-Vader Village, with proceeds expected to support the food bank and items from the thrift shop to be available for families in crisis.

For more information, drop by the location of Winlock-Vader Village at 503 First St., in Winlock, or visit the food bank just downstairs during their open hours on Wednesdays from 10 a.m. to 2 p.m.

Residents in the Toledo area will have access to a new drive-through espresso stand starting this Saturday at Toledo New Life Assembly Church.

Good Bean Espresso will be open weekdays and Saturdays in the morning and afternoons to provide an easy-access source of coffee and snacks to local commuters, while the business also allows the church to provide local jobs and support for their ministries.

"We thought it would be a good way to connect with our community," said Pastor Greg Quinn, stating part of the goal is to support such programs such as Possibilities Pregnancy Center and the work of church missionaries, as well as provide "a quality product at a reasonable price."

Many local residents have been eagerly anticipating the opening of a new Mexican restaurant in Toledo as renovations continue at the old location of Los Pepes downtown.

While Chimi's Mexican Restaurant had been hoping to open in time for Cinco de Mayo, managers are now looking at a possible opening by June 10 as efforts continue to upgrade the building.

Project Manager Fernando Ortiz said the goal is to create "something really very welcoming" as walls have been knocked out to install river-facing windows and a new, larger door has been installed at the entrance. Ortiz said the layout inside will not have changed very much, except there will be a clearer line of sight between guests and servers, as well as new equipment in the kitchen.

"We are still doing the finishing and detail stuff," he said Thursday, stating the opening date of June 10 is not firm, but would be their ideal goal at this time.

Chimi's, inspired by the name of the chef's signature dish, the chimichanga, is located on Cowlitz St. right next to the Toledo Boat Launch, and area residents are encouraged to keep an eye out for a flashing "Open" sign once the upgrades are complete.

Many Winlock residents have been eager to see who will move into the space vacated by Firehouse Restaurant and Lounge and a pair of local business-ladies have announced their intention to open a new eatery there by this fall.

Two Chick's Diner, emphasizing Winlock's historical connection to egg industry, is intended to open this September under owners Judy Costello and Viola Chickese, who have begun renovating the space into a family-friendly restaurant.

Costello said the goal is to offer breakfast and lunch, as well as a full bakery capable of filling special orders, and said local residents will be greeted by a completely new exterior and interior when the renovations are complete. She added the old bar area will be closed for the time being and may be re-opened in the future as an ode to old soda shops.

To check out the progress at Two Chicks' Diner, you can find their location in Downtown Winlock at the corner of First St. and Pine St.