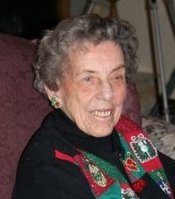 After graduating from Raymond High School in 1939, she moved to Aberdeen to attend the Grays Harbor Business College. With the bombing of Pearl Harbor in Dec. 1941, WW II touched the United States, and there was a need for secretarial workers in Washington D.C. Loving adventure and wanting to serve her country, Odessa headed off by train to her new job as Administrative Assistant in the Department of the Navy, where she worked for eight years. She typed a letter for Admiral Nimitz, for President Truman’s signature, which authorized the bombing of Japan. She attended one inaugural ball and two inaugurations (FDR and Truman), and always loved to tell her stories of her time there.

She returned to Raymond to marry her childhood sweetheart and best friend, Orville Ekman, on December 10, 1949. After raising two children and becoming bored being an “empty-nester”, Odessa began a 16-year career working as a secretary for the Raymond School District. She loved working with the teachers and children at the Riverview Elementary School.

Upon retirement in 1986, Odessa was finally able to do the three things she loved most, including travel, volunteer work and square dancing. As a charter member of the Peppy Pacers Square Dance Club, Odessa and Orville enjoyed more than 20 years of fun and friendship square dancing all over the State. Odessa was a Tuesday regular for 25 years as a volunteer at the Pennywise Thrift Store, and would have been seen there up until this Christmas when it became too much for her. She also was able to visit Europe, New Zealand, Alaska and Hawaii, and spent her 80th birthday with Wayne Newton in Las Vegas. She volunteered at the Tourist Info Center, the Food Bank, The Red Cross, and was active in her United Methodist Church for 80 years.

In 1996, Odessa and Orville were named Citizens of the Year for Raymond for their years of Volunteer work. Odessa was a devoted Mariners and Sonics fan. She loved to play pinochle, spend time with friends and grandchildren, work in her flower garden, go to concerts and theatre events, play penny machines at any casino she could get to, and make pies. Odessa’s claim to fame is her Lemon Meringue Pie.

A wonderful wife, mother, aunt, sister, grandmother, great grandmother and friend, Odessa will be missed by all those that have had the pleasure of knowing her.

Her husband, Orville, and her brother, Woodrow Jones, preceded her in death. She leaves behind her son, Richard (Pam) Ekman of Raymond; her daughter, Lenna (Ralph) Owens of Las Cruces, New Mexico; granddaughter, Ambritt (Ben) Roberts of Puyallup; grandson, Jace (Stefanie) Ekman of Lebam; great grandchildren Kingston and London Roberts; Nevaeh and Ryker Ekman; Niece, Karen (Gary) Meyer of Sheridan, Ore.; Nephew Robin (Cathy) Jones of Eugene, Ore.; along with many very special nieces, nephews and their families from the Ekman side.

A celebration of Odessa’s life will be held at the Raymond United Methodist Church at 2 p.m., Saturday, March 23, with a reception following.

Inurnment will be at Fern Hill Cemetery in Menlo.

Arrangements are by Stoller’s Mortuary.