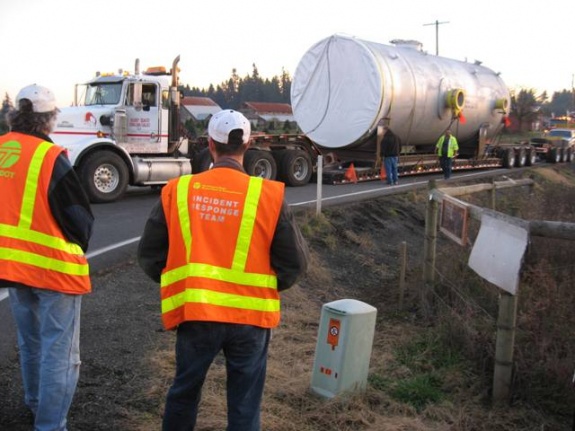 Emergency responders from the Washington State Department of Transportation assisted a wide load attempting to make its way up N. Military Rd. for close to 11 hours Saturday.

Another oversized load became stuck on S. Military Rd. Saturday, though it did not pose nearly the obstacle a shipment of oil-drilling equipment did back in June.

The large metal tank, owned by Shell Oil, had been described by WSDOT employees at the scene as two feet too tall to travel safely on I-5 and was required to take side roads on its way north to Anacortes.

Challenges were first encountered when the load was carried onto N. Military Rd. from West Side Hwy. in Vader at around 6 a.m. that day. The tractor pulling the trailer had trouble gaining traction on the steep section of N. Military Rd. just north of SR 506, partly due to pine needles and other debris, is was said, and experienced a failure of its transmission system.

A second tractor was brought in to continue hauling the trailer, while a tow truck was used to haul the defunct tractor up the hill.

After traveling roughly six miles to the intersection N. Military Rd. and SR 505, the rig was stalled again at around 3 p.m. when it was determined the current tractor was too long to make a right-hand turn onto SR 505 and the trailer was unhitched while crews waited for a replacement tractor to arrive.

At around the same time, the truck towing the tractor with the bad transmission broke down itself just before the intersection with SR 505 but had to be left on the side of the road while the larger obstacle was addressed.

The trailer spent around two hours stuck at the intersection and at least one lane of traffic remained open during that time, though larger vehicles were asked to find alternative routes.

It was just before 5 p.m. when the trailer was back on its way, headed east on SR 505 to meet with its second tractor waiting at the Park and Ride lot before proceeding north on Jackson Hwy.

Though a somewhat lengthy disruption of traffic, this stall pales in comparison with an oversized load carrying part of on oil rig, which entirely blocked SR 505 for four hours on June 14 after the trailer fell into the ditch while attempting to turn north onto N. Military Rd.

The rig had been destined for Gray Harbor and efforts to pull it from the ditch involved removing some axles from the trailer to make the turn. Supports used by rescue vehicles ended up leaving potholes in SR 505, which currently have yet to be corrected.

WSDOT employees at the scene said the rig from June and Saturday's tank were unrelated, in the sense they were being shipped and were owned by different companies. But one flagger remarked he expects to see a greater number of oversized loads traveling backroads as trucks are continually being engineered to carry larger cargoes. 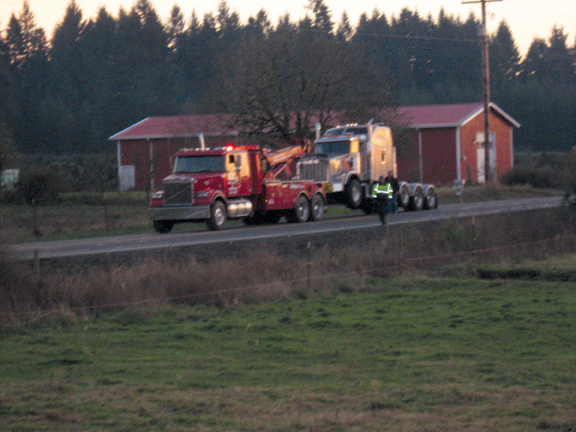 A tow truck (left) was called at around 6 a.m. to haul the tractor originally hitched to the oversized load (right) after its transmission blew while hauling the load up a steep section of S. Military Rd. just north of SR 506, in Vader. The tow truck itself eventually gave out near the intersection with SR 505 while following the load uphill. 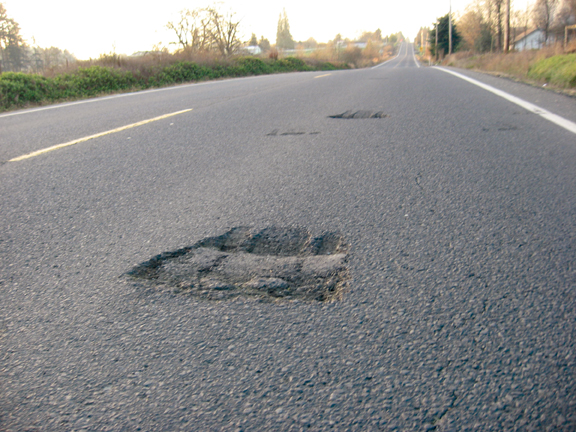 Potholes in SR 505, just west of the intersection with N. Military Rd., left by towing equipment used to pull an oversized load out of the ditch on June 14. Though the trailer on June 14 and the trailer on Saturday were both hauling oil-related equipment, the June 14 trailer blocked traffic for four hours and left far more damage on the road.