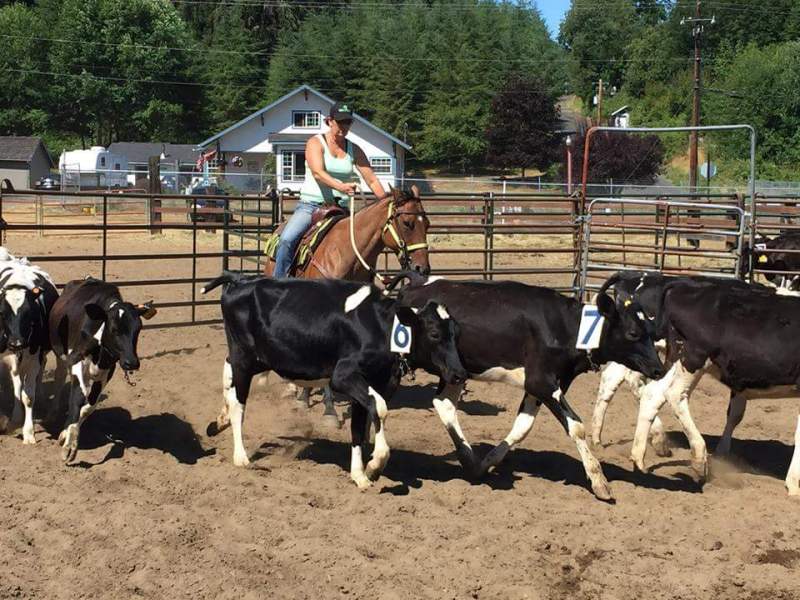 During a sorting event one rider has to pick-out a specific numbered cow from the herd, and sort them into another pen. The rider then continues to sort the cows based off of the number that they started from.

For some local riding enthusiast a sorting event weekend turned into more than just a practice run.

"When we started getting the weekend together, we were just going to hold a practice weekend to help those learn about sorting cattle," said organizer Val Rowe.

But when Larry and Gwen Mielke brought in their 30 head of cattle, and saw the number of people who were interested they were joined by Wayne Cotton and held a mini clinic on Saturday with a full "Sorting" event on Sunday.

The event takes a pair of riders on horseback and places them in an area that is separated by fences. On one side you have 11 head of cattle numbered from 0-9 with one of the herd not numbered or called a "blank". The team decides who will sort and who will run the gate - the separation point between the two pens. After the team has decided who will perform which duty time starts as the sorting rider crosses a line to enter the pen with the numbered cows. The judge calls out a number and the rider must sort that numbered cow out of the herd, through the gate, and into the other open pen. The sorter continues to sort out the herd in order numerically from where they started. If a wrong number is sorted or the "blank" cow gets through the gate, they are considered a "Dirty Cow".

After their first run the positions change for the next sort for that same team. The rider at the gate helps keep those cows that have been sorted in the second pen as well as helps the sorter get the right cow through the gate.

With several riders new to the event the clinic was held to give the new riders tips about the challenge that provided a marked improvement during the Sunday sort.

One rider, Mark Busby, took the day by winning the final jackpot ride.

"The jackpot was about $60 and the team of Busby and Janelle Lutz split the winnings. Busby is an awesome rider for a 9-year-old and he was on an awesome horse, Howdy," remarked Rowe.

The young rider made such an impact on those at the event that he will be joining horse events at this upcoming Pacific County Fair.

"He didn't have a dirty cow all weekend," exclaimed Rowe.

The public is encouraged to stop in during the Pacific County Fair to check out some of the horse events and see what all the fun is about.