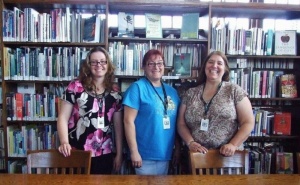 Photo by Vivian Edersheim Library staffers Tania Remmers, Andrea Pfister and library manager Emily Popovich stand ready to serve the public at the Raymond Library, which is celebrating 100 years of service this year.

Ask for a peek at original children’s census records from 1911-1931, or a review of typed histories of local pioneer families.

Or check out a Nook for online books.

Young or old, native or newcomer, the Raymond Library undoubtedly has something that will catch your interest. Or, if you’re so inclined, just sit back and enjoy the ambience of an 84-year-old building with its old growth timbers, unique stained glass panes in some windows, and architecture true to its period.

The library story began with those three individuals who, on March 26, 1913, swore, “so help me God,” to serve as trustees of the newly established Raymond Public Library, which was housed in a building on Commercial Street. Martin C. Welsh notarized their signatures. One hundred years later, their inspiration continues as a thriving community treasure.

It’s theorized that Raymond folks were spurred to this commitment by the Carnegie Library started in 1913 in South Bend. The Raymond Library trustees sought Carnegie funds to boost their library plans in 1919 and were turned down because of the war effort.

With tenacity that characterizes Raymond even today, the lack of outside funds hardly put a stop to the local efforts. The trustees turned to one another, and others in the community, for the support needed to make it work. And make it work, they did – with a library building that was completed in 1929.

Although the building is less than 100 years old, Raymond’s library service dates back to that 1913 agreement made by Lewis, Burnside and Siler. Their commitment is the reason for this year’s centennial celebration at the Raymond Library.

Early support came from librarians Winifred Hardy Gilchrist and Ella Danielson. Stella Raymond, wife of the man for whom the city is named, was secretary of the board for a number of years. Each individual associated with the library in its early days took his or her part quite seriously. Librarians, over the years, were inclined to stay in that position for decades.

Support also came from the general community. A copy of one document on display today shows donations of 50 cents; $1, $2 or $3 from Willapa Harbor Stevedor, Swanson Grocery and Kennedy Press, to name a few, for the purpose of purchasing shrubbery for the library.

Current librarian, Emily Popovich, relishes everything about the library: Its history, the building and its contents, the programs made available, these days, through the Timberland Regional Library System, of which Raymond is a part.

“Timberland is a great organization and we have lots of visitors tell us we offer so much more than where they come from,” says Popovich.

“Of course everyone is welcome and we’d love everyone to use all of our services,” she added. “It is property tax dollars that make it possible. Everyone has already paid for the library in one way or another. So, when we have a program or you check out a Nook it is free.

“The library is more than books. We have DVDs, music CDS, online databases to teach you a language, find your heritage or other research. We have books you can listen to or download to a device to read. We now have devices that you can borrow to read pre-downloaded material. I could go on and on. We also have a bulletin board of local events and various brochures are available in the hallway.”

Popovich grew up in the San Bernardino Mountains in California and later earned a master’s degree in library science from the University of Kentucky. She has been a South Bend resident for 23 years, working two years at the Aberdeen branch and 16 years – seven as manager – at the Raymond Library.

A five person library board, appointed by the mayor with council approval, includes current members Bruce Walker, Bunny Roberts, LaRayne Watts and Gordon Crump, and one vacancy. The board helps with decisions concerning the building, such as pest control, new toilets, or painting. They can step in and advise the council and mayor of things that need to be done for the building.

The library building – finished in 1929 at a cost of $25,000 – included features that made it a community center for decades. The ground floor includes a slightly elevated stage, now used for a checkout area but originally used for plays, musical performances and other events.

For years, the ground floor didn’t include library services. Instead, it housed offices, including a rations office during World War II and Pace Nutrition in later years.

The building, when built, included a dumbwaiter used by library staff to get heavy loads of books from the ground floor to the second floor. In the 1990s, the dumbwaiter was replaced with a lift that can provide elevator service for patrons – if they don’t mind a confined space for a leisurely ride. The lift is still used for transporting books, too.

The building houses lots of nooks and crannies for exploring, some available to visitors, some off-limits except upon request.

Popovich has goals for the library. “I would like to get as much of the building repaired and preserved as possible. It does cost money, but if we do repairs now and in the right way the building will last a lot longer,” she said. “I also want the community to take pride in this building and in the fact they have a library, even if they don’t use it.”

Today, the library can be visited in ways not imagined in 1913, when Charles L. Lewis, Clara S. Burnside and Sarah Siler signed their pledges. Patrons and even those without library cards can make a “virtual” tour of the library by means of the Internet and Facebook. It’s all about keeping up with the times.