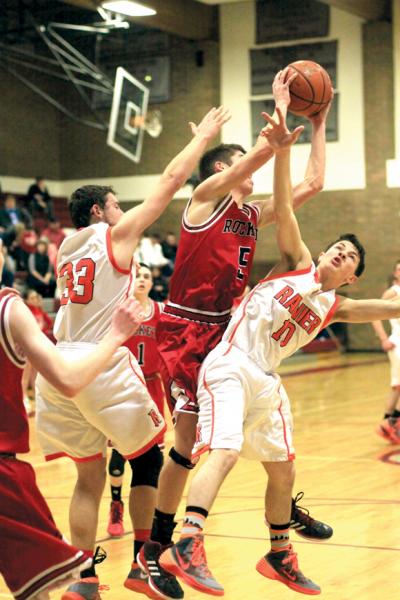 Rocket Junior Mason Klingberg battles for a rebound against two Mountaineers during a first-round game in the District IV 1A Basketball Tournament Feb. 11.

Castle Rock advanced into the quarter-final round of the District IV 1A Tournament on Feb. 11 with a 55-40 win over unknown foe Rainier from the Evergreen League in Montesano.

Brock Johnson and Mason Klingberg both scored 20 points apiece while Ty Johnson added 13 for the Rockets.

The Rockets led the entire game and never really looked back after a flurry of early scores by both teams. CR Head Coach Kevin Johnson was complimentary of the Mountaineers.

“They play really hard,” said Johnson. “They are athletic. I think more than anything, they hurts us on the board.”

“I thought that we guarded them pretty well,” added Johnson. “We had some ball screen coverage problems early.”

Despite scoring 20 points, Klingberg was well-defended.

“They had us scouted well,” said Johnson. “They took Mason away a little bit. Their pressure was able to give us some trouble.”

Despite the attention, Klingberg was good for nine rebounds while Ty Johnson had seven assists.

“Brock made some shots and loosened it up a little bit and Mason still found a way to get some,” said the coach.

“I felt that with my team knocking down shots from the outside, it gave me the opportunity to play my game and get one on one action down low in the key,” said Klingberg. “Our team prepared in practice by going over the scouting report of Rainer and taking advantage of what we knew about them. We figured out their strengths and weaknesses and found a way to play our game and adapt to their game.”

It was Brock Johnson that made the Rockets fly in the first half with four three-pointers as CR took a 30-23 lead at halftime.

After a third quarter comeback by Rainier to climb within seven, the Rockets blasted out to the final 15-point margin mid way through the 4th quarter.

Editor's note: due to an early deadline, Castle Rock's match-up with Woodland will see coverage in the next edition, but look on line for more timely information. 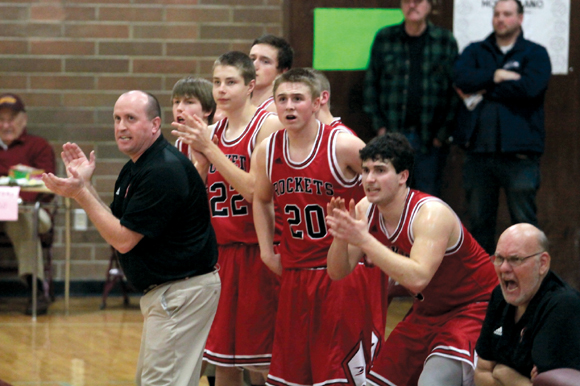 The Castle Rock bench players and Coach Kevin Johnson (far left) applaud the play of their teammates on the floor against Rainier on Feb. 11 in the first round of the District IV Tournament.